Should Babies Be Trick-or-Treating?

I have a rule about babies trick-or-treating. It started out as a silly mistake. A young man knocked on my door with a toddler and a small baby girl. The toddler held up a plastic pumpkin, and the father was holding a pillow case. Without thinking I simultaneously dropped chocolate bars in both the pumpkin and the pillowcase. "Oh, no!" the Dad said, apologetically, "the pillowcase is just the extra bag for when his pumpkin gets full."  He tried to dig around in the bag and give the chocolate bar back.  Trying to spare us both embarrassment, I said, "Well that's not fair. You have two kids in costumes. You get two chocolate bars."  He seemed incredulous. "I do? But one of them is just a baby!"  "Doesn't matter," I declared. "Two kids in costumes means two treats. You can eat it yourself. Because once she's old enough you aren't going to get away with that." The more I thought about it, the more it made sense. So this became my candy-dispensing policy. 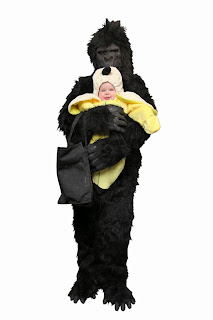 A few years later, on Halloween, I found myself with a five month old baby of my own. I was very excited to be celebrating my first Halloween as a parent, but I had nowhere to go. I had a spectacular costume. I was a gorilla, and my little girl was its banana. The costumes had been very difficult to obtain. It turned out to be a huge process just to get into the them and no small feat to walk around in a mask carrying 18 pounds of baby with loose rubber hands.  I entered a costume contest and won the grand prize so I knew I had something good. But that only lasted a couple minutes and the banana costume wouldn't fit her for much longer. It was all rather anti-climactic.  So, wanting to get the most for my effort, I went trick-or-treating.  It was fun to go door to door and see the neighbour's reactions, and because I couldn't communicate effectively in the gorilla mask, I collected a little candy. I hadn't forgotten my self-imposed rule that if you have a costumed child, you should get a treat. I had worked hard for it, and everyone seemed happy to comply. 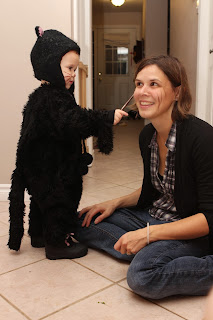 Exactly one year later, my daughter was 17 months old, and she knew all about Halloween. She asked if she could be a kitty cat. I couldn't find a costume small enough to fit her so I lost several hours of sleep sewing one by hand. I let her paint my face instead of buying an adult costume.
She LOVED trick-or-treating. She loved knocking on doors, hearing people's dogs bark, checking out decorations, and sure, we collected candy.
But this year I wasn't in disguise, and the reaction was different. "Oh. Are you actually collecting candy?" one woman asked flatly.  A few said, "Sorry, I don't have anything for babies."  So I went around to just the houses of people I knew.  One of them made a point to tell me that she felt her child was too young to stay up late or eat candy, even though she was the same age as mine. She coldly handed me some chips and shut the door. After I got home, I saw that she had tweeted, not too subtly, "I can't believe that some parents would take their babies trick-or-treating just to get candy for themselves!"


(Rude neighbour, if you read this, the way I see it I worked really hard planning and sewing my child's costume. I held her hand as she toddled at a snail's four blocks in the pouring rain, tripping over her tail to get to your house. I climbed ten steps to your front door just to brighten your day with her smile, and I think I have earned the crumpled up bag of chip crumbs you gave me. Your petty reluctance over that ten cent item cost you a friendship.)

But all this leaves me wondering. Is it inappropriate to take young children trick-or-treating? I asked a number of my friends after this and most of them thought that it was acceptable.  Some said they thought it was okay if you only visit family and friends.  But of course not everyone has family in town. I don't. And in my case it was so-called friends who questioned my motives. 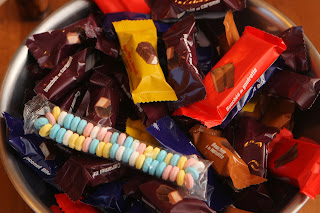 Here's my take on it. If someone comes to your door with a baby in a costume, go ahead and question their motives. But really think it out. You'll come to see that their intentions are honest. Are they really committing some kind of ploy to get candy? If so, it's not a very good ploy. An adult costume costs between $29 and $69.  An infant one is at least $24.99 in a costume shop. To make one or and to even to get a free one and carry your child from house to house takes a lot of time and effort. Keeping them up past their bedtime has its own consequences that parents pay for dearly the next day. A box of candy is about $8.99. It's only half that price on November 1.  It would be a more worthy return on investment to just buy candy than to go through all that hassle.

Of course most Halloween parents are not actually motivated by greed. When you see parents with a newborn or a one-year-old out going door-to-door, see them for what they are. These are excited parents who are staying young.  They have a special place in their hearts for all the traditions and rites-of-passage that come with childhood. They can't wait to share these traditions with their new baby, even if it is perceived as silly. They'll have photos one day that prove to their child that they never missed a Halloween, if that is important to them. These are parents who are getting a trial run in parental involvement. And if their child is under two, they are probably working really hard and are pretty tired. Those early years are rough.Who cares if the kid is too young for candy? Maybe Mom and Dad deserve a Kit-kat break.

That isn't to say that parents who don't trick-or-treat with babies are any less enthusiastic about parenting. They either have their own traditions or perhaps they aren't as innocent when it comes to what's expected of them in those early years. There's no rule book for these things. The point is that trick-or-treating with your children, at any age, is not something a parent should ever be made to feel guilty about. 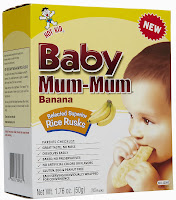 So what should you do if you don't feel right about giving candy to a baby?  Stock up on Mum-Mums or raisins. If there really are parents who are just plain greedy, this will disappoint them. (Good!)  If they genuinely want an experience for their baby, they will appreciate your consideration.

And if you're that parent who wants to go trick-or-treating but can't face the judgment?  If you're short like me, wear a mask and nobody will know you're not an older sibling.  Donate the candy to a worthy cause, like a child who can't trick-or-treat due to illness or mobility issues. One mom cleverly suggested that you can send it in a care package to our deployed troops.  You can also save the most non-perishable items for the future– those smarties will still be okay when it's time for potty training incentives. In my family we use Halloween Candy to decorate gingerbread houses at Christmas, and even babies enjoy that. If you really don't want to collect candy at all, team up with a charity and collect canned food or donations.

There are enough issues with child rearing that something fun like Halloween shouldn't garner any judgment. There are easy ways around it. It should be simple as taking candy from giving candy to a baby.