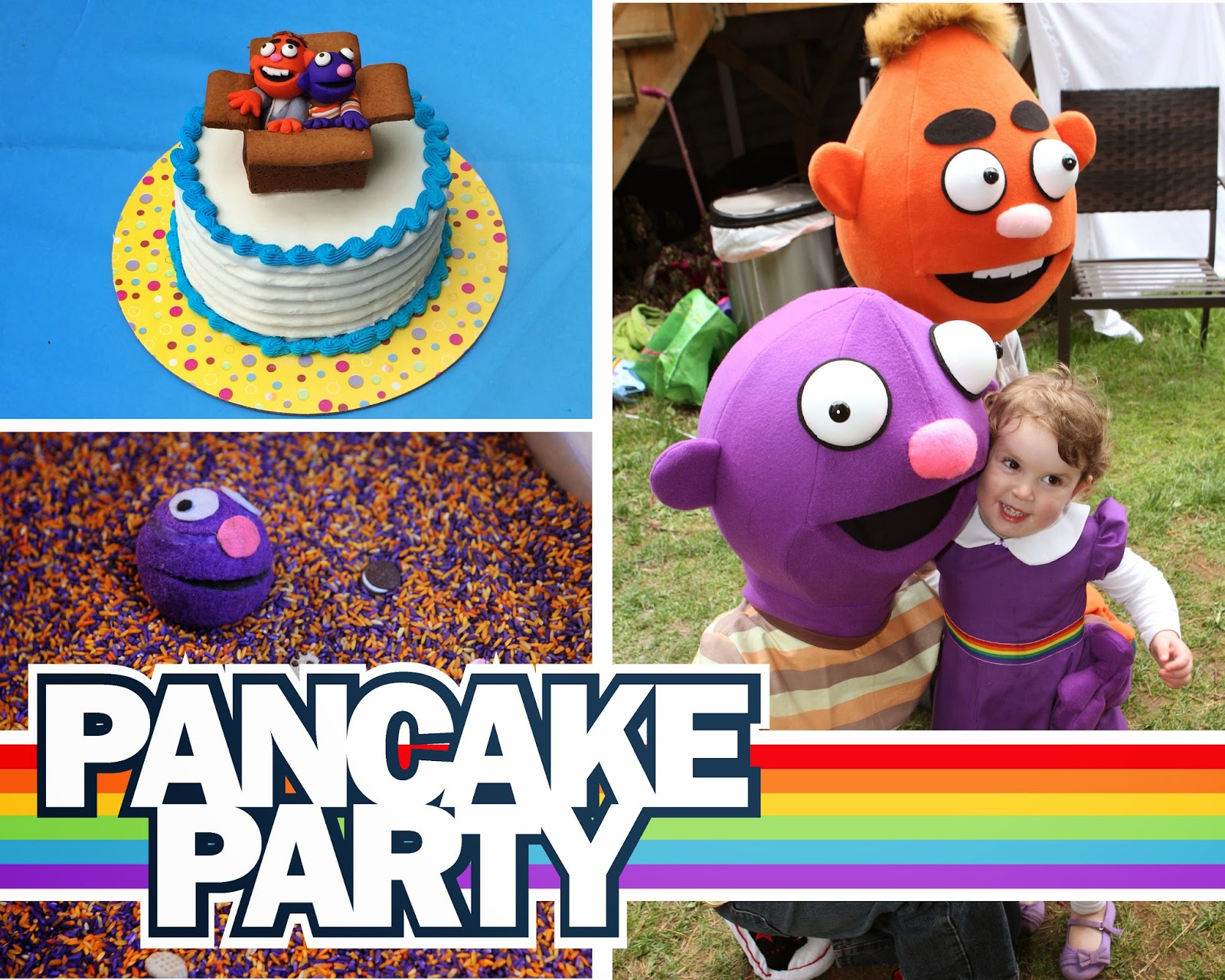 Pancake Manor is a musical video series billed as "Alt Rock Meets Fraggle Rock."  It stars the lovable brother-puppets Zach and Reggie, and my daughter goes nuts for it.  The 2-4 minute videos, available on You Tube, pack a huge educational punch into one small snippet of screen time. And it's pleasing enough to the ears that I proudly admit to listening to it in the car even when I'm all alone.

This purple and orange duo are not well known, at least in the sense that you won't find their faces on everything from underwear to lunch boxes.  But they're number one in our household which values quality over commercialism. And it means a lot to us that the video's creators are from Canada, the country which created children's television gems like Mr.Dressup, Captain Kangaroo, and The Friendly Giant. Canada is due for its next big thing and I'm hoping this is it!

Now the only trouble with loving a non-commercialized program is that when birthday time comes around, and your child asks for a Pancake Manor theme party, you're not going to find it in a box. A ton of DIY is in order. Here's what we came up with. 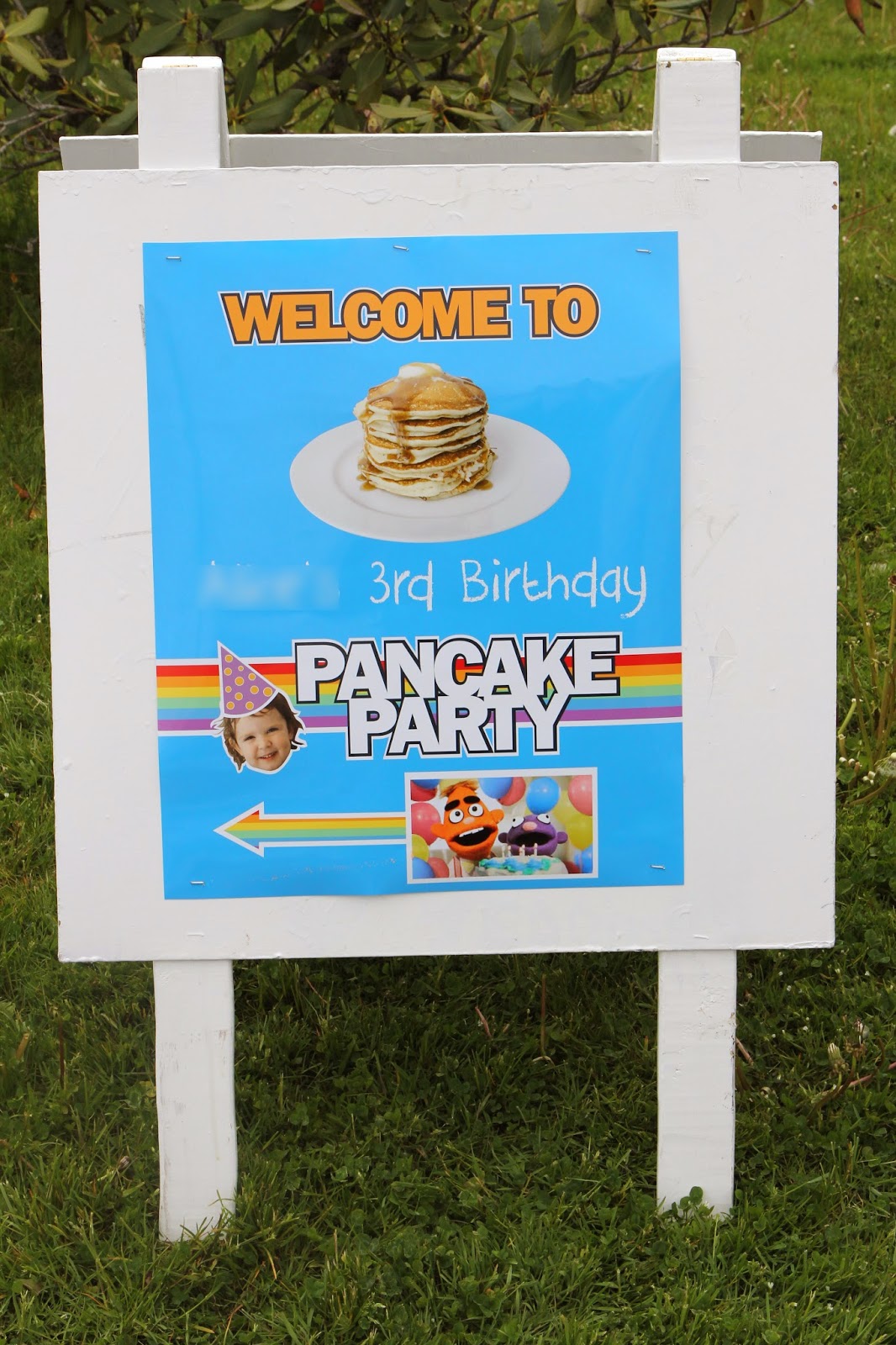 We had the party in my backyard, and it was a good thing, too, since 53 guests showed up!  Hopefully that means Pancake Manor will have 53 new fans. I made this poster to let the guests know that the party was in the back.  It was easy to make with Illustrator, Franklin Heavy font and a next day pick-up at Costco for only $9.99. 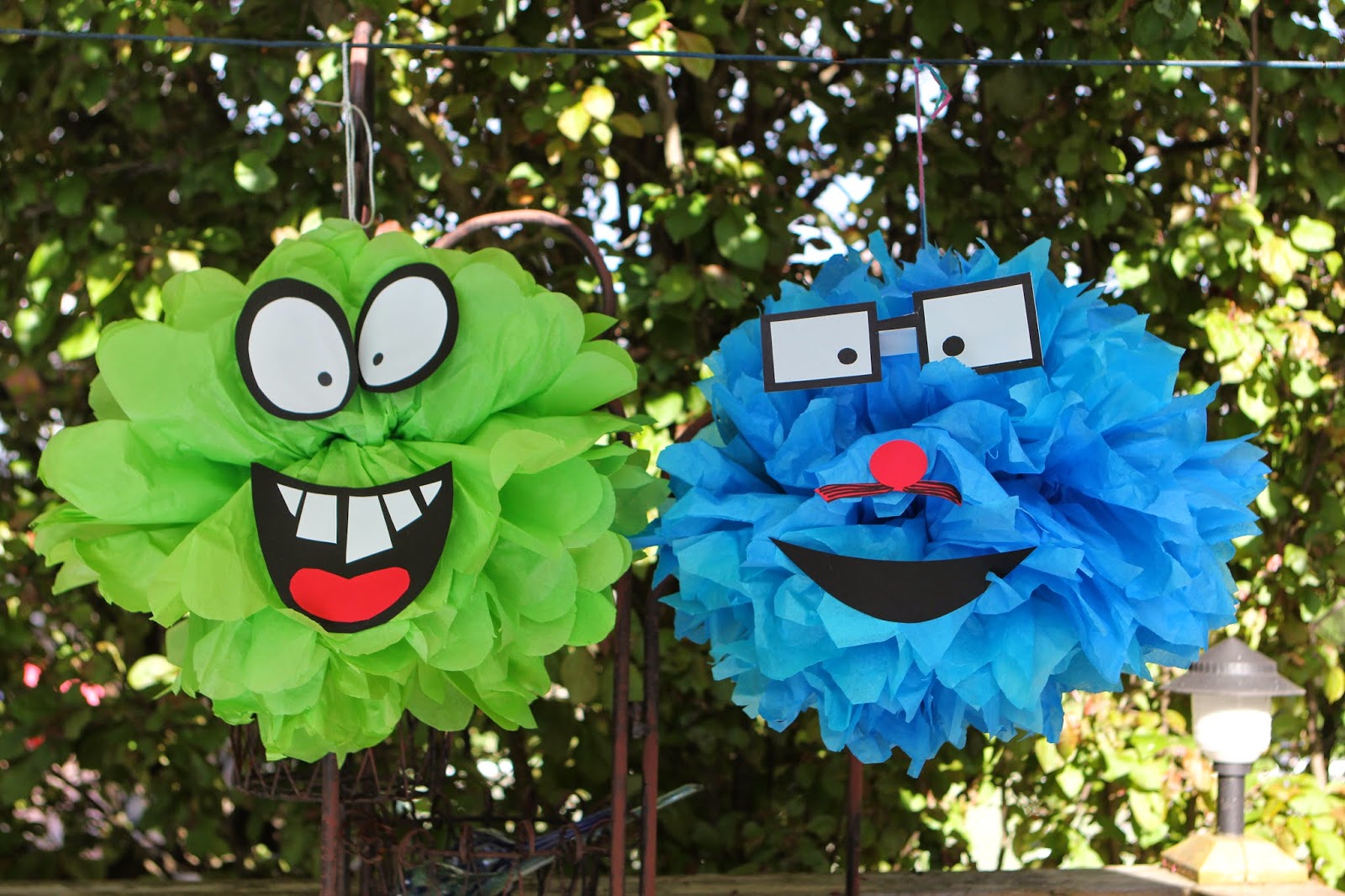 For decorations I had orange and purple balloons. I also made these monsters out of tissue paper pompoms like the monsters in the names song. Unfortunately it ended up being to windy to put them up.


This is a dinosaur bones archeology dig, based on the dinosaur bones song.  I found these little plastic dinosaur skeletons on ebay  and buried them in the sand. To make it even more challenging I soaked the sand in water and froze it, then put dry sand over top, and the only tool I put out was paint brushes. Somehow they worked together and excavated them all! 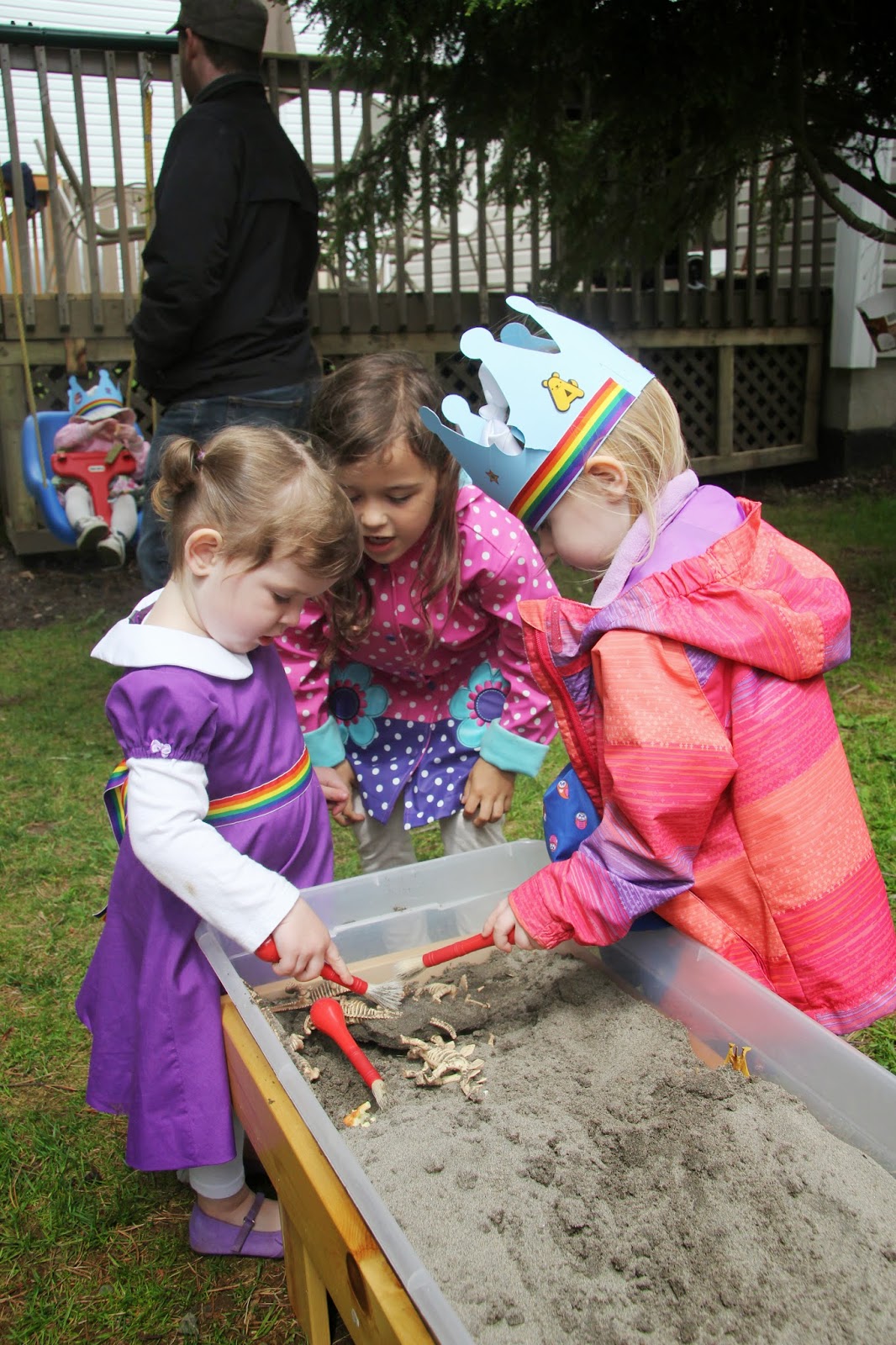 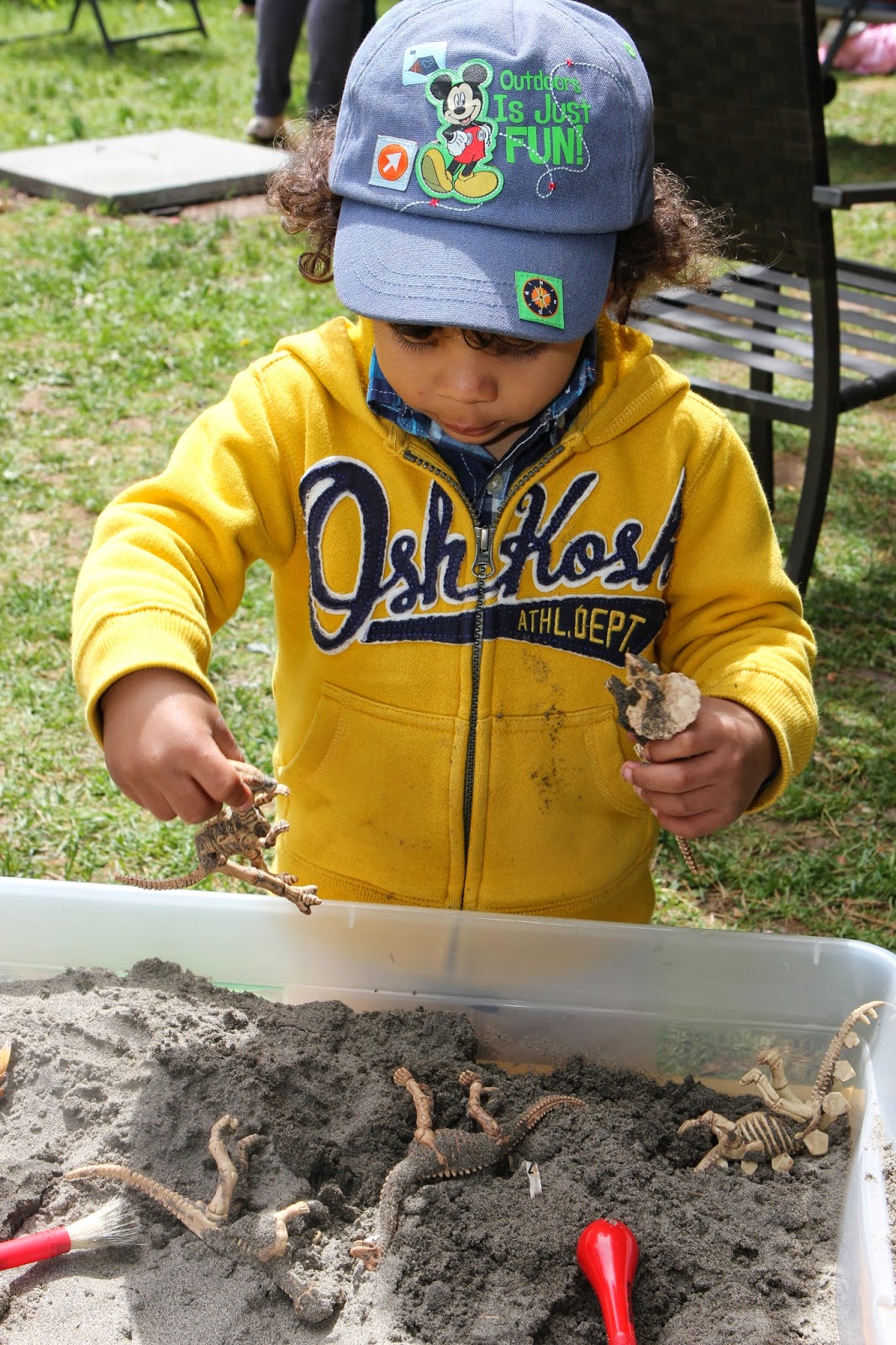 Everybody loves the cookie dance song. Reggie keeps finding cookies in questionable places, but only the ones Mama gives him are good to eat. It's hilarious! I found these tiny cookie shaped buttons and hid them in our rice box. For this occasion I used food colouring to make the rice purple and orange. I added several "Reggies" made from purple dog balls and felt features. The object of the game was to have Reggie root around and find the cookies and eat them.  And then, uh.. cough them back out so someone else could have a turn. 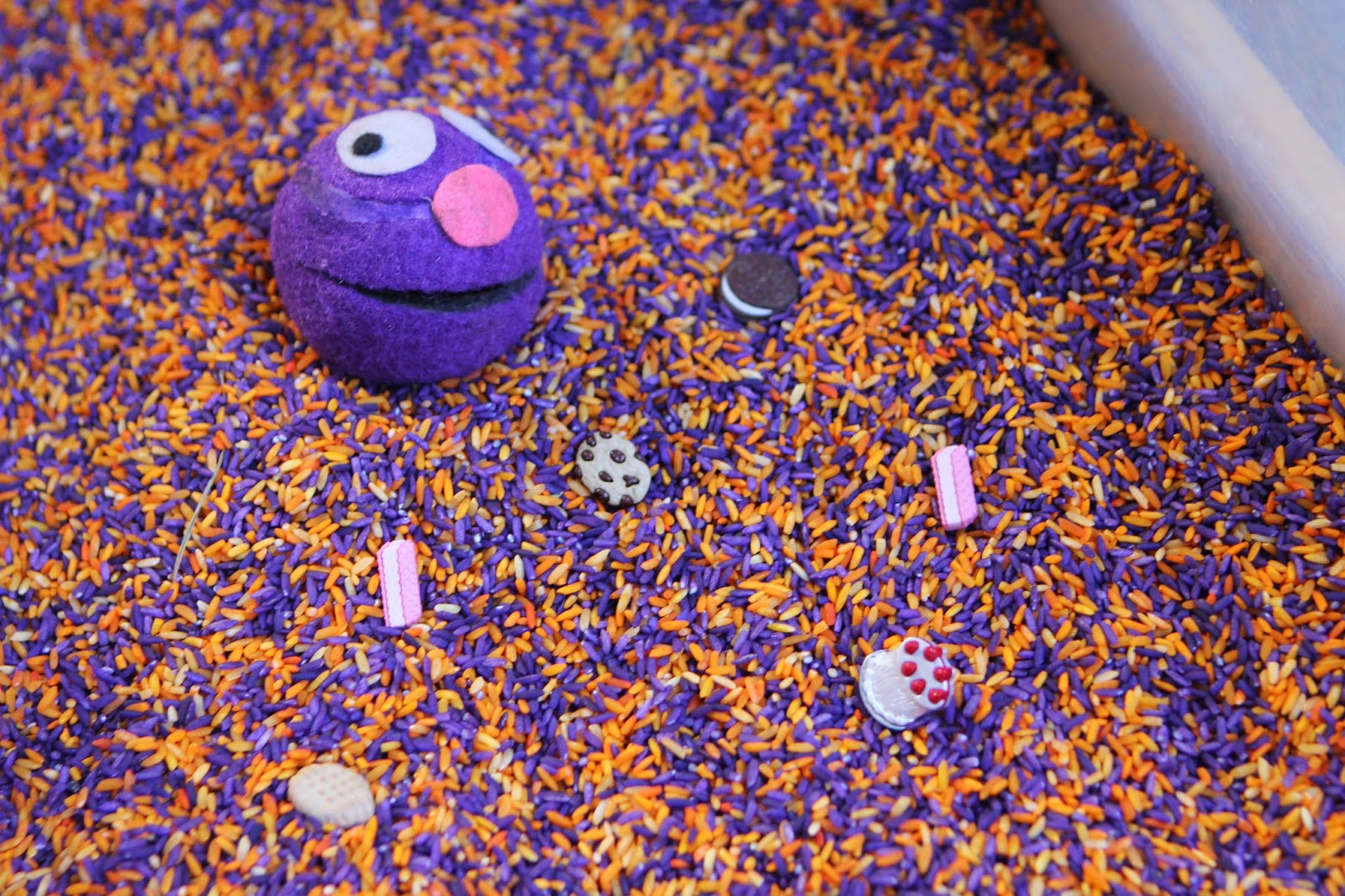 This ball pit is actually a regular feature in my back yard, but it fit in nicely with the theme, since Zach and Reggie love sports and balls. 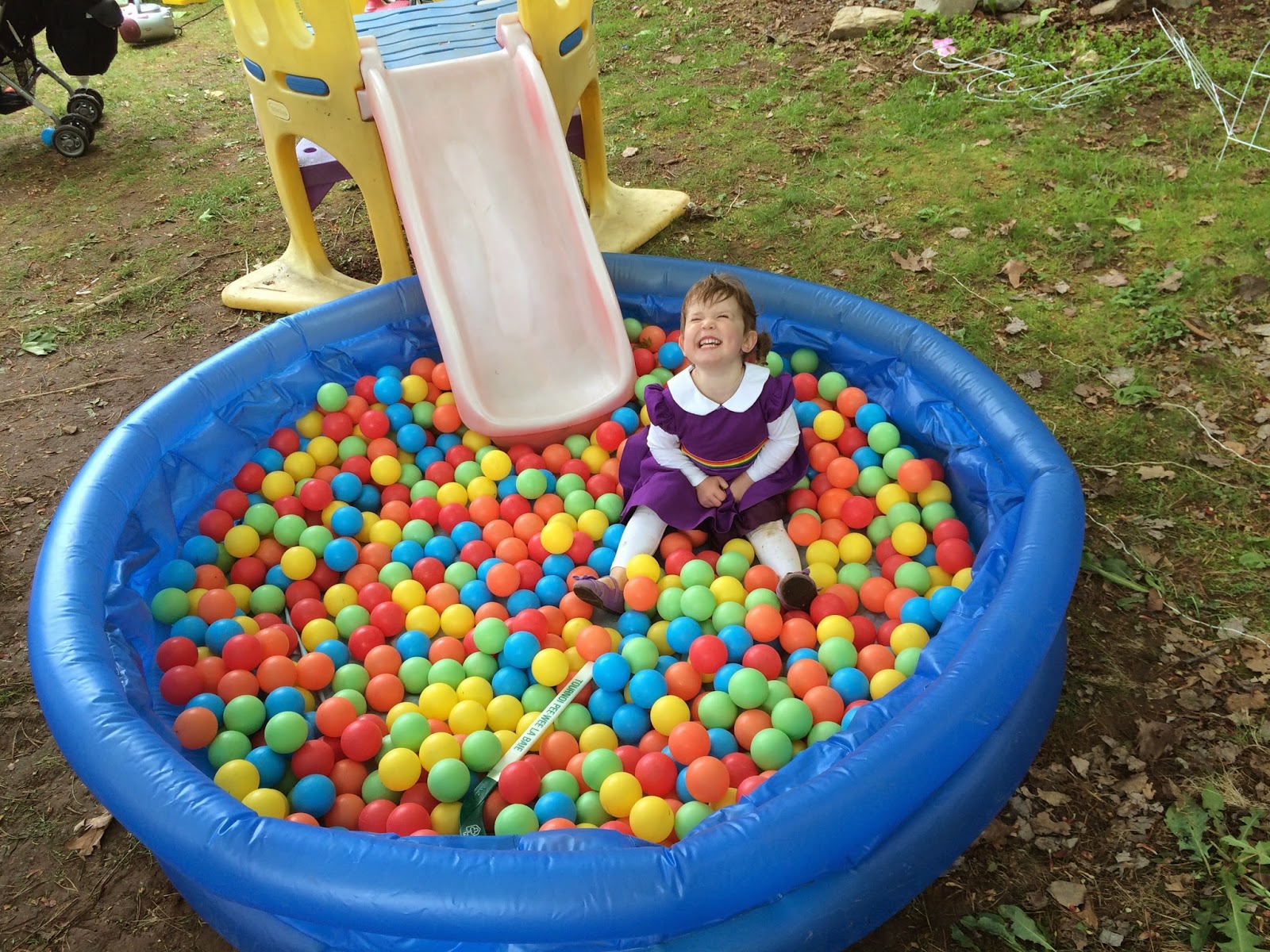 I kept the blue background with rainbow as a running theme throughout the party, with the exception of my daughter's dress, since she will only wear purple. I made these paper crowns by tracing over a Burger King crown onto poster board and modifying the design a bit.  The rainbow was a ribbon that I glued on, and the children got to decorate the rest of it with alphabet stickers and some awesome Pancake Manor stickers generously supplied by Pancake Manor. 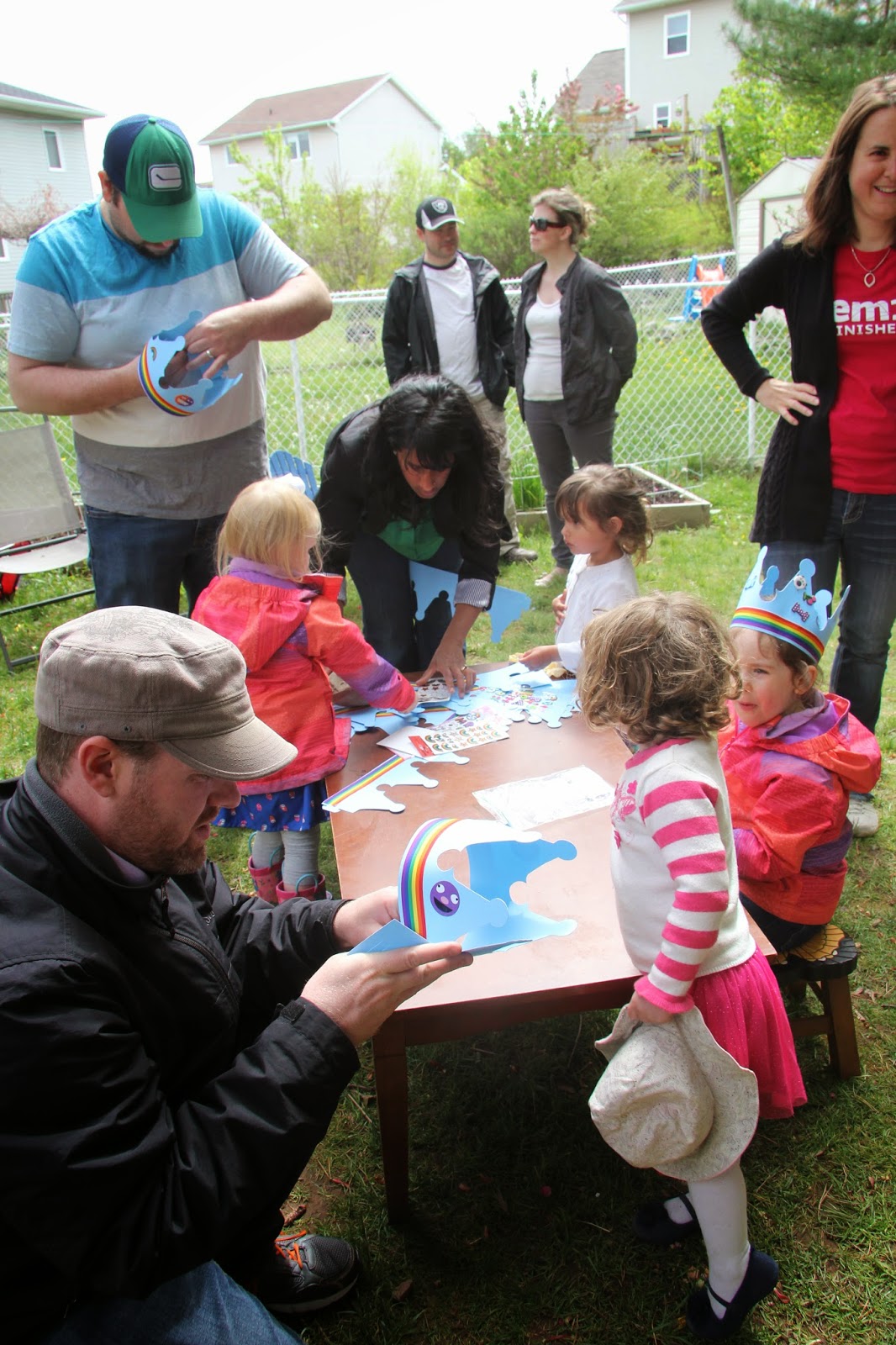 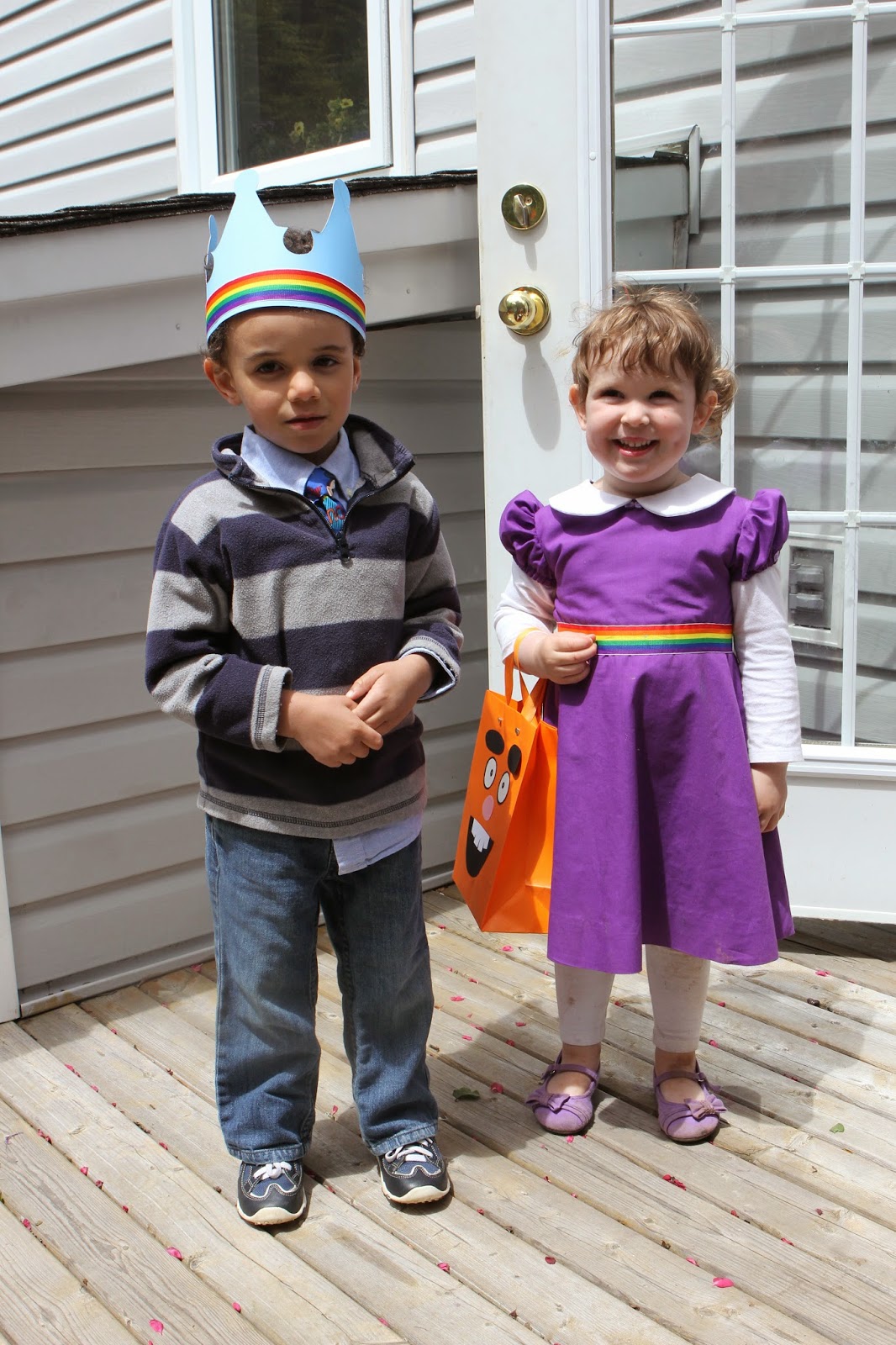 All the food at the party was theme based, which was the easiest part.  Salsa, Bananas, and Cookies each have their own song, the lyrics of which I posted next to each item with a printed photo in an acrylic case from the Dollar store.  I also added "Gwapes" because kids love grapes and because they get a mention in the song "Super Turbo Flying Machine." 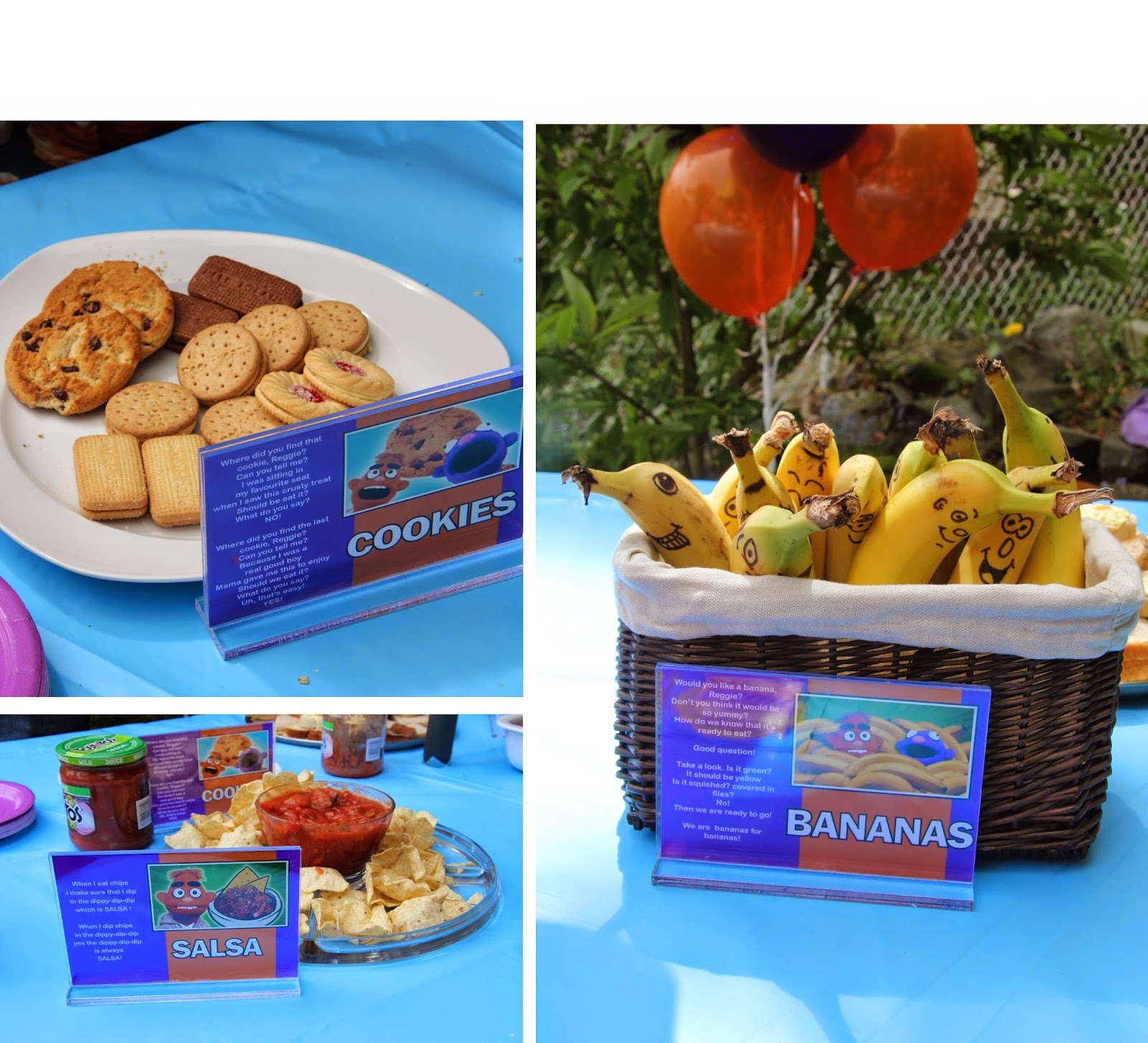 Of course we'd be remiss not to include the most party worthy food of all: pancakes. That was a job for the Grandmothers, since Mamma was busy snapping photos. My mother even made a pancake apron and a matching one for the birthday girl. 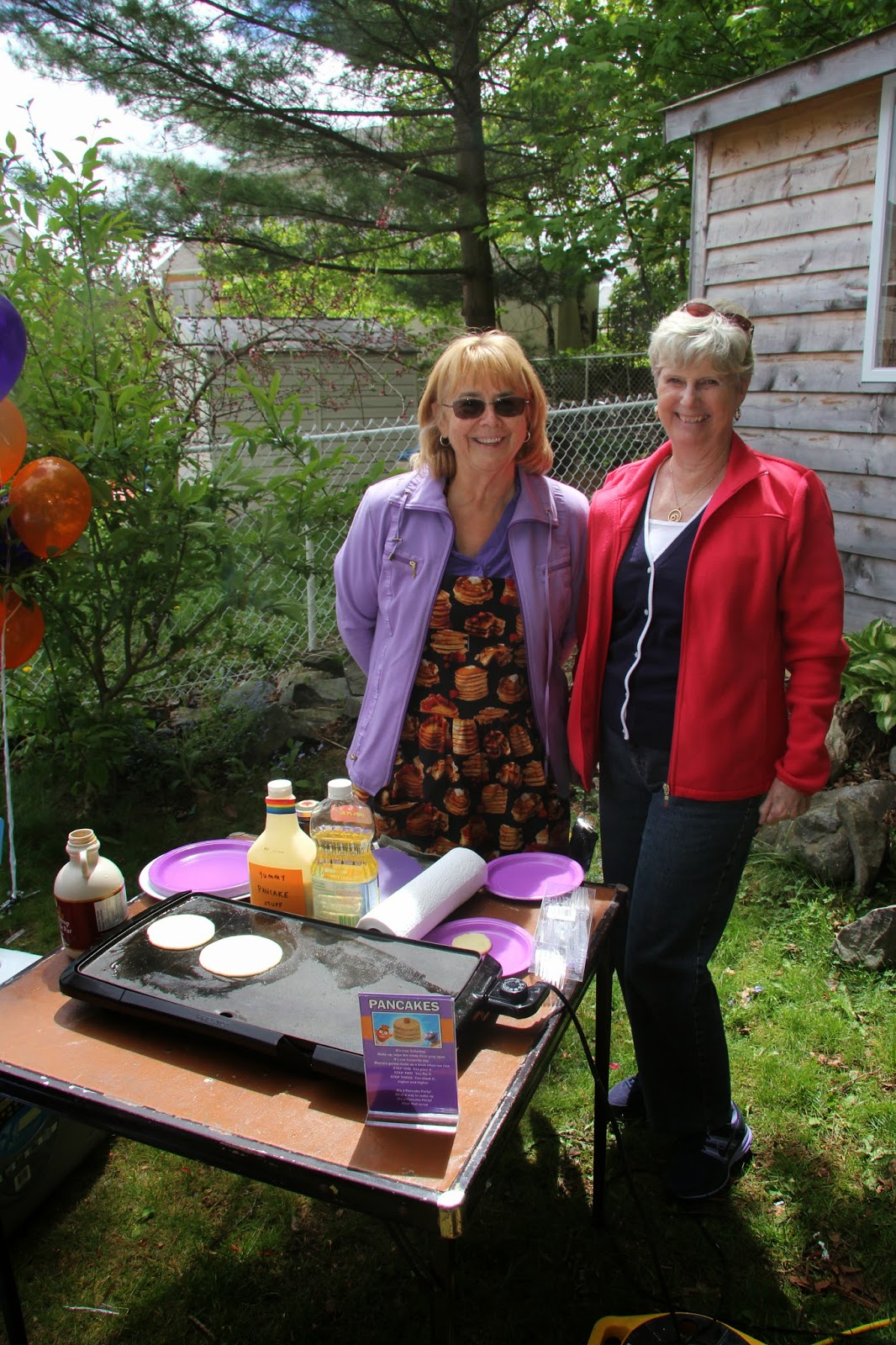 For lunch we had all kinds of sandwiches, cut into rounds, squares, triangles and rectangles. I didn't get a photo because they were gobbled up so quickly!  Here's the sign I had on them. 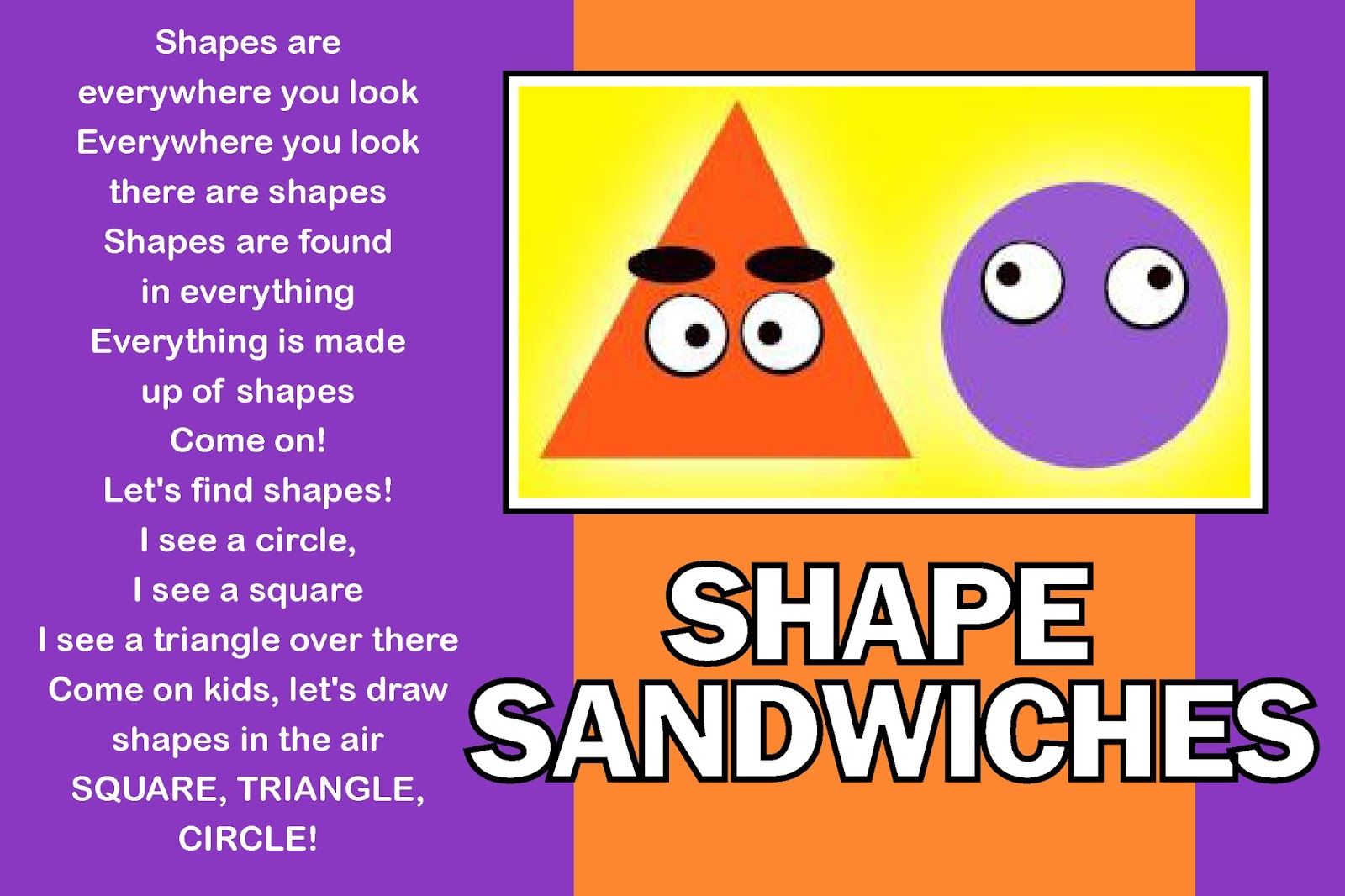 Of course, veggies are important for a balanced meal. Here's a carrot Zachary!  His eyes are ramekins filled with Ranch and Caesar dip with olives, and his mouth and eyebrows are eggplant. His hair is cut from a whole wheat tortilla. 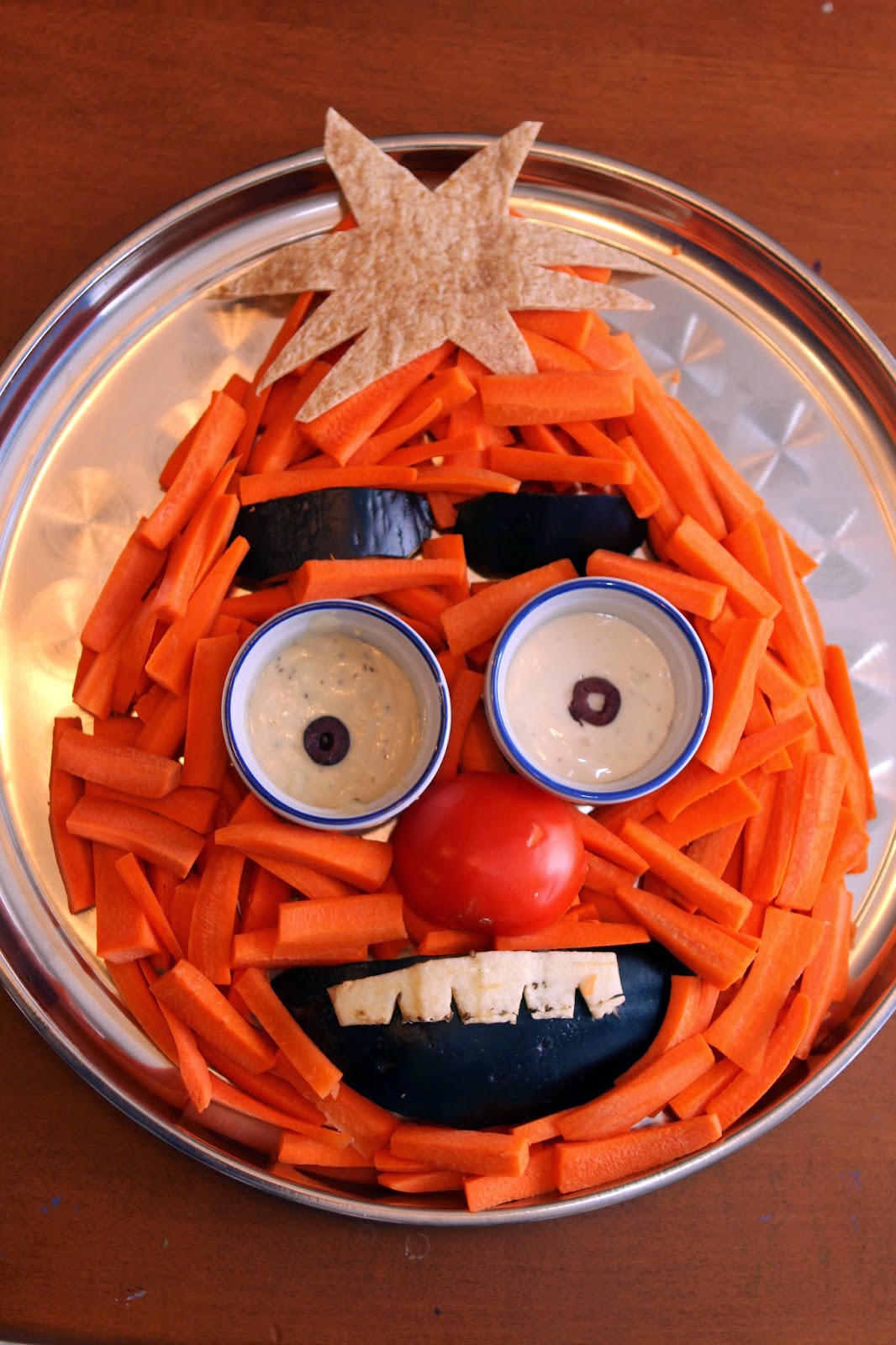 The fully edible cake topper is Zach and Reggie in their Super-turbo-flying-machine. The box is made of gingerbread and the characters are dried fondant. I had never made fondant figures before but it turns out you can use fondant just like modeling clay and dry it a few days in advance. I made the bodies in three parts starting with the legs, so that the bottom would be hard enough to support the top.  I dried it in the oven between sections. The secret to making the heads just right is to wrap coloured fondant around black, then cut into it with a sharp blade to make the mouth. The eyes are just candy eyes. Yes, you can buy candy eyes. 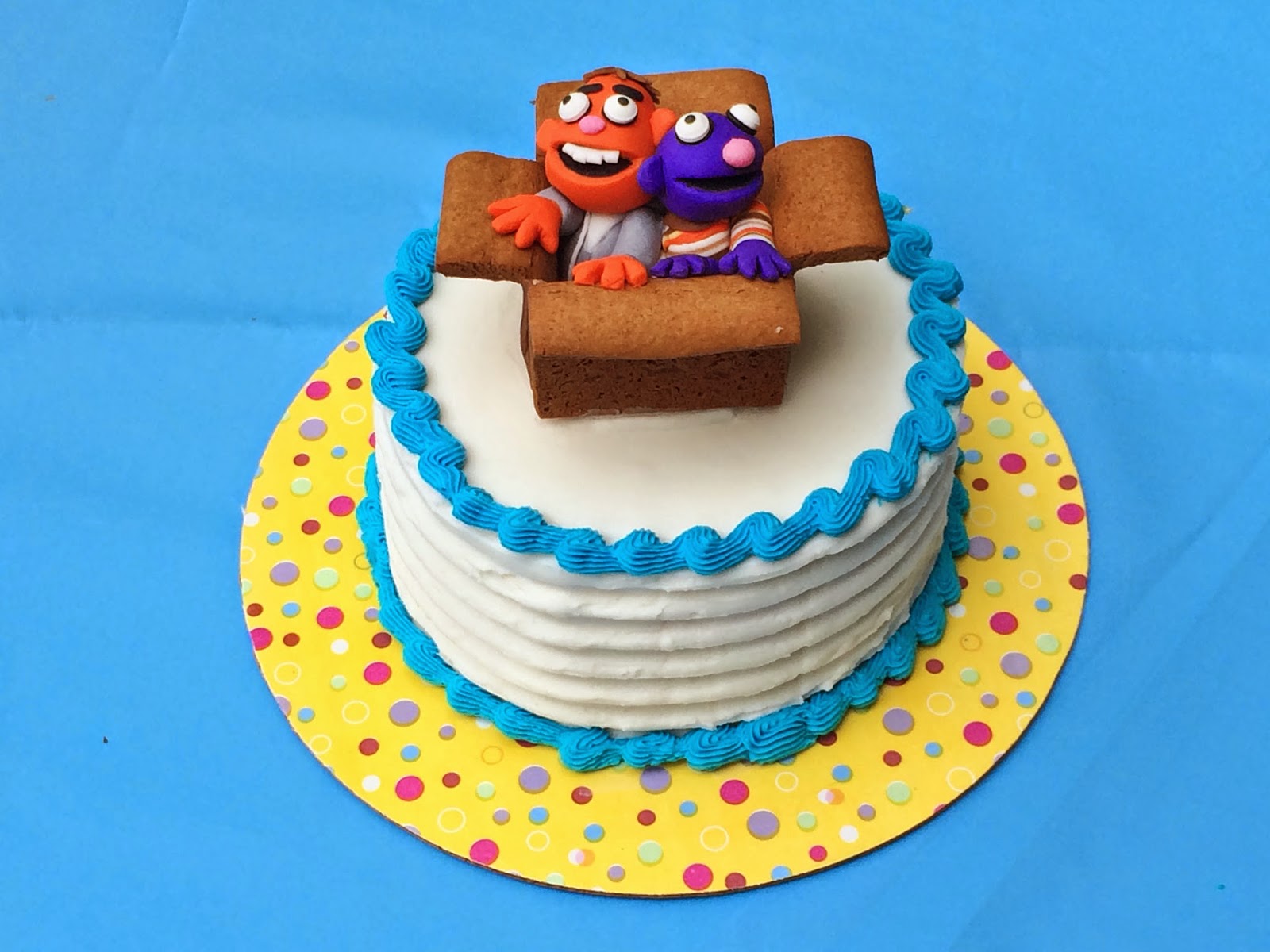 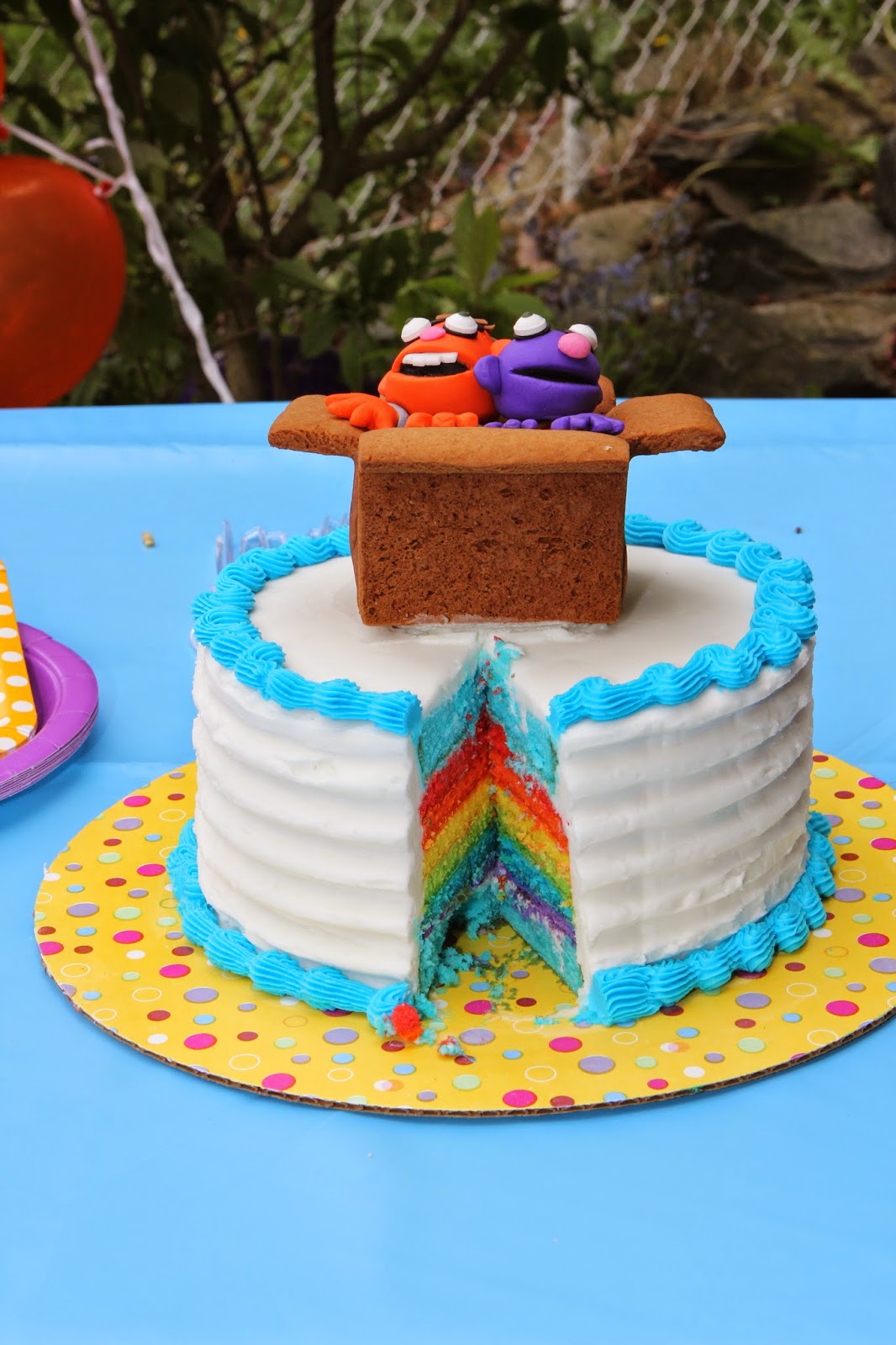 True to the nature of the party, the inside of the cake is an actual stack of pancakes. I used regular white cake batter, slightly watered down, coloured each batch with Wilton gels and poured it into a frying pan in a shallow layer. Instead of flipping the cake-pancake I put a lid on the pan and cooked it on low heat until the top looked dry.  Each one cooled on a sheet of wax paper, then I stacked them with a bit of icing in between each layer. I cut the whole thing to be perfectly cylindrical, then covered it in buttercream icing. The outside was reworked to look like a pancake stack with a special cake texturing tool.

I made this second cake for my daughter's actual birth date, because it was too windy at her party for her to blow out the candles. This time I made a plain cake and decorated it to look like a real stack of pancakes, which turned out to be easier than the first cake.All I needed was the edging tool. 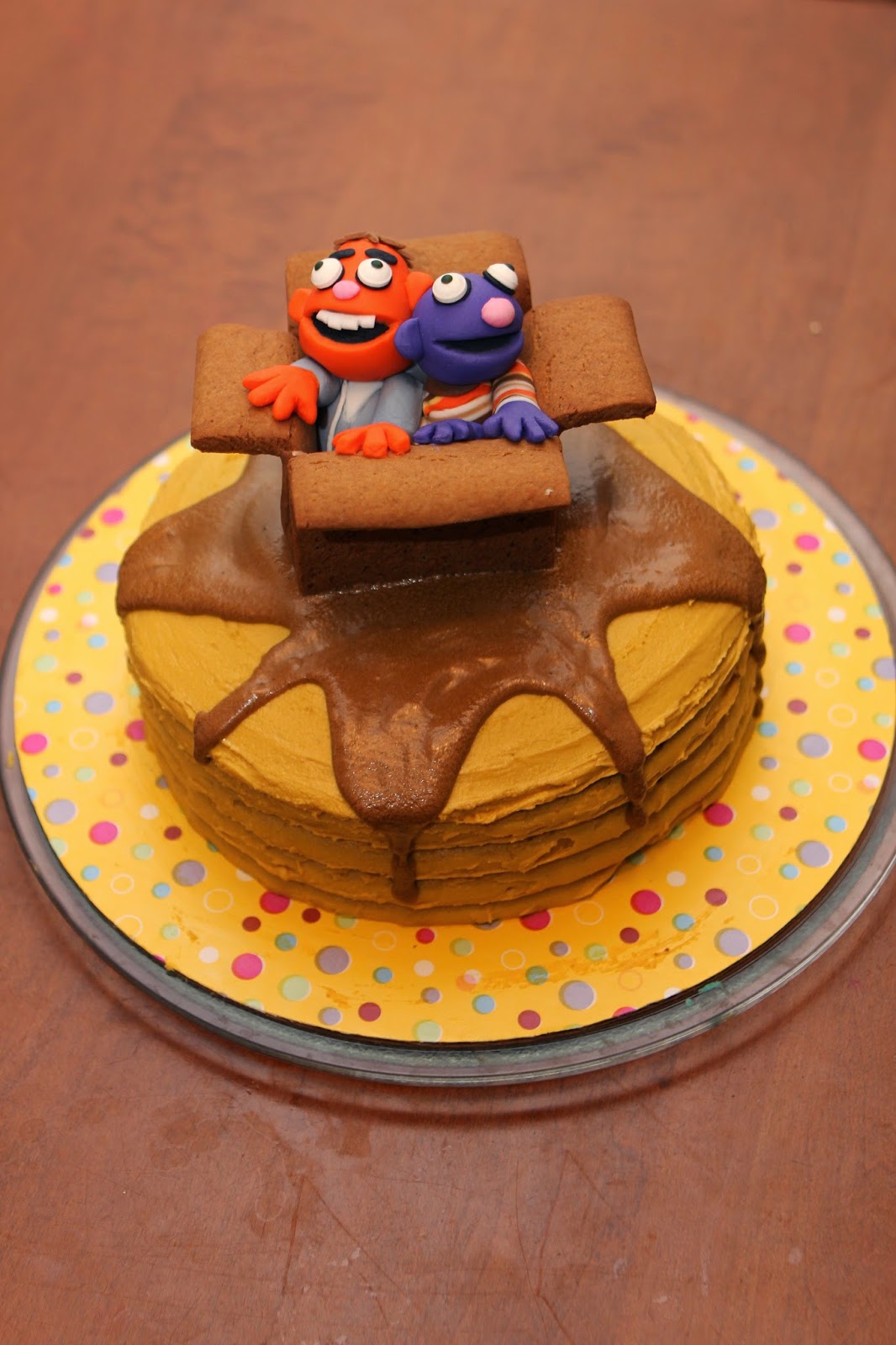 The climax of the party was a visit from giant Zach and Reggie, who did the arms and legs dance and shake break with us.  The costumes were, of course, the most time consuming part of this party. I have never attempted any sort of cosplay before.  But I'm happy I made them because I learned some things about how paper mache and sewing along the way. 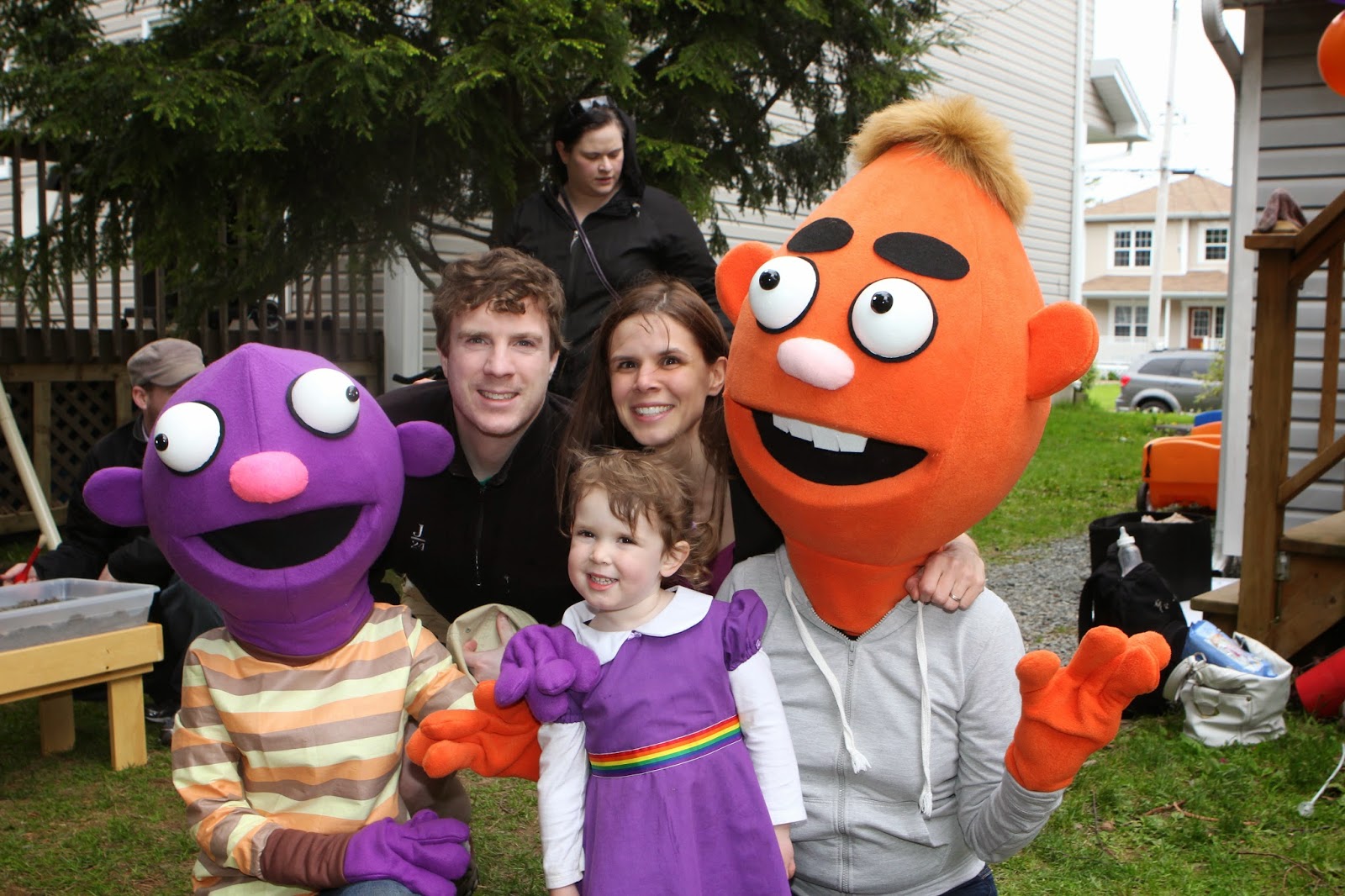 Basically the heads are strips of newspaper and almost a litre of watered down glue, plastered over a ball and a balloon. The neck is a ring of poster board.  When they were dry I cut the mouth, added a bit of cardboard for the lips and paper mached some more. Then I drilled some air holes. All that was the easy part. Fitting the fleece over the newspaper took some trial and error. The eyes are styrofoam balls cut in half and painted, and the other features are felt. The pupils are polymer clay domes formed around the head of a screw. I found the shoes at a second hand store.
I found a couple of volunteers among my facebook friends to learn the songs and dance around for us.  They got a lot of hugs and high fives.  Zach and Reggie are two popular guys! 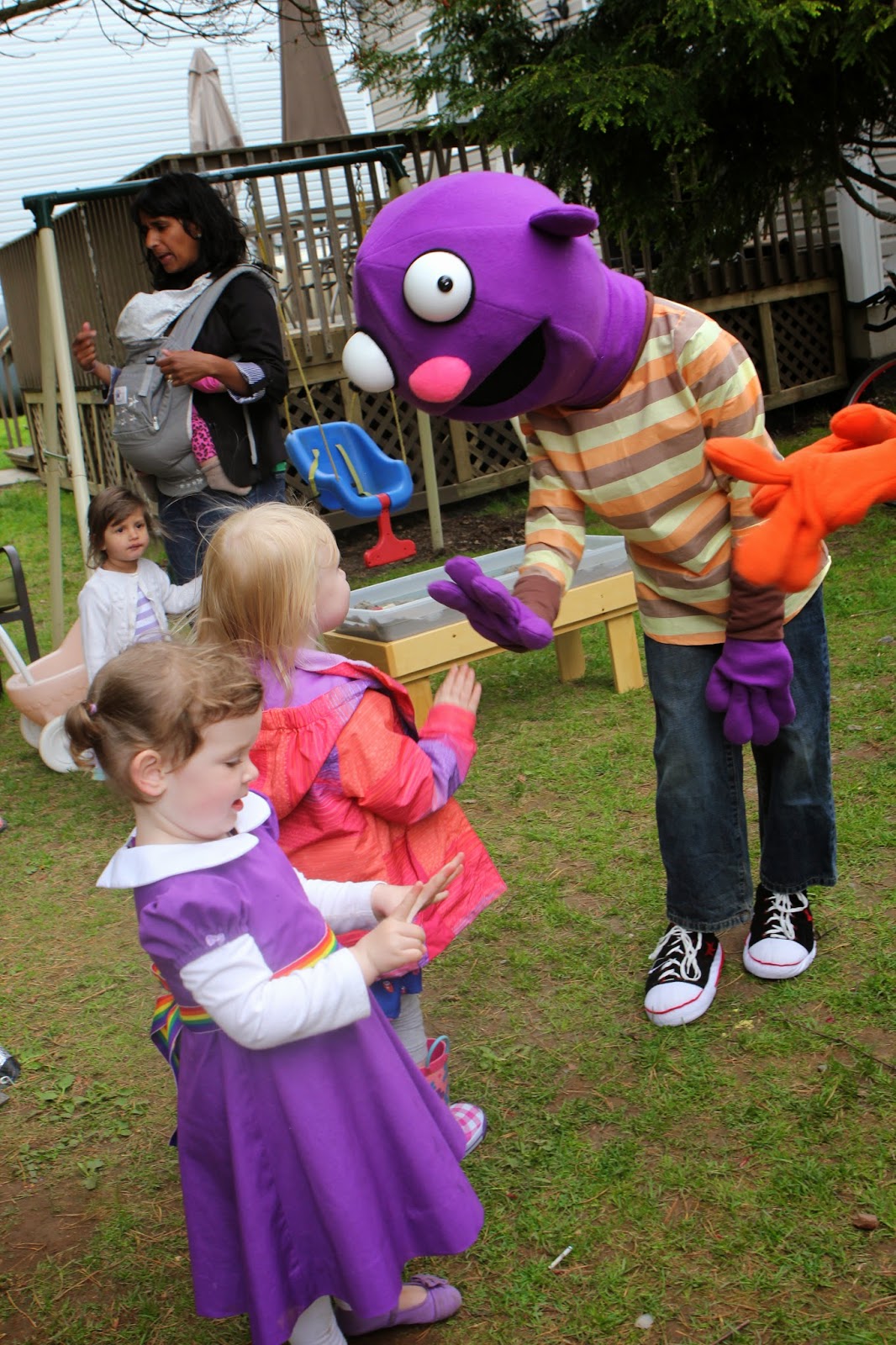 The big finale was the watermelon toss, as mentioned by Reggie in the Sports Game video. I decided to do a watermelon toss about two months before I worked out just what, exactly, a watermelon toss might be.  It sounded like fun, though I hadn't the faintest idea how it would work.  The thought of three-year-old's tossing watermelons themselves while wearing party clothes really didn't appeal to me.  But when my daughter requested a piñata knew what I would do. I put a 24 inch patio stone on the lawn. I had my sister hollow out two large watermelons. Then I filled them with loot. I gave each kid a bag, and bombs away!

And that's how you have a pancake party. What a way to wake up!