If you missed my last post, I began explaining how I gave my two year old a crash course in agri-tourism by visiting seven farms along the 101 Highway through Annapolis Valley. The last post discussed Windsor, and in this one we will explore two of the most famous farm hot-spots: Noggins and Elderkins.

Have a look at the map: 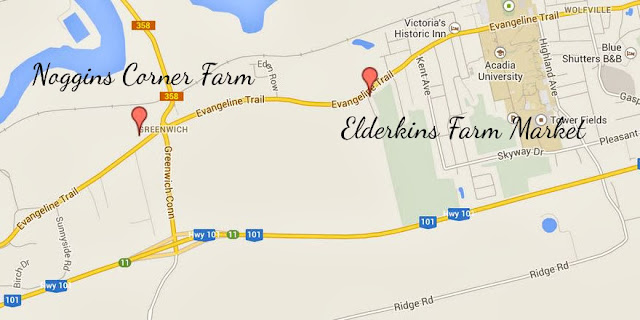 What you will do is follow the 101 Northwest until, like a cheap computer game from the 80's, the highway bumps into a geographical boundary and everybody veers west. Take Exit 11. Take the Greenwich Connecting road and turn left at the lights to get to Noggins Corner Farm. There it is, on the right! You made it.


Now, writing about popular attractions always creates a paradox for me. On one hand, Noggins has crowds and all the problems that come with crowds: waiting, parking, the corn stand running out of corn, and other people's kids knocking my kid down.  But on the other hand, finding a massive throng of pumpkin pickers and apple eaters means that, duh, lots of people love Noggins. And you probably will too.


If you have kids age three and older I wouldn't hesitate to recommend Noggins, with a word of advice: Tackle the orchard before you enter the play area. I can't even count the number of parents I heard pleading with their children to leave the Fun Zone Distraction Zone to go have a look at some trees. A corn maze is not the place you want to be when your little monsters are having a ball and trying to elude you. I used to play in corn fields myself as a kid and I can attest that they are super fun and a great family challenge. Especially compared to a potato maze, if there is such a thing.

Noggins with toddlers is a different story, given their fickle nature. Even though kids two and under get into the attractions for free, Mom and Dad (or parent and partner, let's be modern) will have to shell out $18.40 for what might amount to the most expensive 20 minutes your child ever spent in a sandbox. The haunted house is too scary. The rope course confounds most little ones- they can go right under the ropes and they can play this game at a bank for free. The tire mountain, rope spiderweb and haystacks are okay if you have a wee climber and can find an opening where there are no big kids to step on your toddler's head. Blue gave the water pumps a try but lacked the height and dexterity to use them, and the slides (made of massive black industrial pipes) are a little terrifying for some.

That leaves the corn maze, which I could go wrong in so many ways I could write a whole post about it.  Think about getting lost, or getting lost holding a 30 lb child who won't stop saying "up," getting lost and your child needing a new diaper or clean clothes and won't stop saying "up," or getting lost while your child ducks in between the corn but you're too big to fit, yet you forge on anyway getting turned around and creating your own crop circles. Better just wander into the corn long enough to take a family photo and then get out and buy a cob for $1.50. Why go into the corn when you can put the corn into you?

Now what am I forgetting? Oh, the produce picking! See how distracting that fun zone can be? To be honest, I didn't even pick apples or pumpkins here this year because I did it last year, had a blast, and took photos, which I will recycle, and admit to doing so lest you think Blue has a Benjamin Button thing happening. 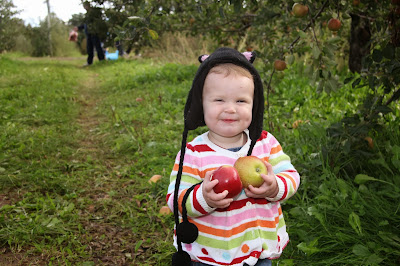 There are over fifty varieties of apples here. We ate at least one of each. My favourite was Empire. They also have the "Delicious" varieties, which everyone loves. Other than that your apple picking experience is about on par with the other farms. If it has rained in the last couple days or might rain, bring mud gear. The hay rides are non-optional if you are picking; they bring you down into the orchard. This means that you will be at the mercy of the comings and goings of the wagon. This is a lousy time to have a diaper blow out or muddy pants (especially if you must sit your child on your lap on the way back). So my suggestion is to either bring your little tot's survival kit with you, or else check out one of the other U-picks where you can park adjacent to the orchard.

Due east along the Evangeline trail is Elderkin's. It is only a couple minutes from Noggins but is technically in Wolfville, not Greenwich. The store was bustling with visitors and it wasn't difficult to see why. In addition to produce, they also sell soft serve ice cream and delicious home-baked goods. There's a reason for the expression "selling like hot cakes." Baked confections straight from the oven are something worth lining up for. When I made some lame comment like "popular spot, eh?" the smiling employee told me that people come from miles around, especially on weekends, sometimes for the baked beans alone.  So then I had to buy some and see for myself. Not that I got to have much, Blue took one bite and declared, "This is mine." 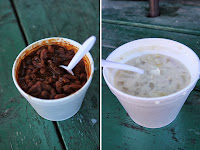 I sneaked some when she wasn't looking, though, and yes, they delivered. Large kidney beans, not too sweet or too watery- just perfect. And they are served with homemade brown bread. We also sampled some seafood chowder that was just the way I like it- hearty and brothy and full of big chunks of good stuff. Not over thickened with flour or over fattened with cream. And it comes with a homemade bun as well. I also bought some cheesy rolls and some confection items- I couldn't help myself- and it was all fresh and fantastic, everything you want in home-baked goods.

The staff at Elderkin's are wonderful. (Bear in mind, I never tell anyone I'm writing about them, because I want a real customer experience.) When I asked what the chowder was like– I always ask because I've been ripped off by cheap canned stuff too many times– the employees at the cash actually introduced me to the chef who took the time to explain her recipe with a lot of flair and pride. I also had a brief conversation with Aaron, one of the Elderkin Clan, who confidently explained why people keep coming back. "It's been established since 1996," he says. "People know the name now. And they want ice cream and bakery items which they can't get everywhere. And all our recipes are made from scratch with fresh ingredients," he says. 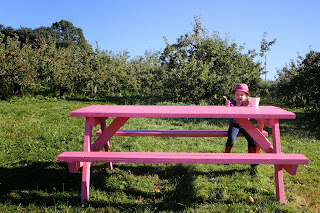 While Elderkin's doesn't have all the attractions that its neighbours offer, this young Elderkin is super cordial about the competition. "We don't have a playground just now," he says, "but they have those things up at Noggins to bring families into the area and that's great. We get families with young children too. There's enough business to go around." He says they may consider adding a play structure in the future. For now, Blue is satisfied to select a pink picnic table from the rainbow of tables and eat her beans in the orchard. We've never had a more picturesque picnic.

And while Elderkin's may not have a slide or a spiderweb, what they do have is over a hundred acres of U-pick pears and apples. They also have a darling little pumpkin patch right beside the road, which is very convenient if you aren't keen on hauling large pumpkins long distances. Bring a bag or a cart though; it's hard to juggle a child and a pumpkin at the same time while crossing a busy road like you're playing Frogger.


One last thing that I like about Elderkin's is that they have a different price system depending on if your U-Pick bag is opened or closed. So if you choose not to fill your whole 10 lb bag, you will pay only $7 instead of $11 for a bag stuffed to the max. So there is no pressure to jam it full and carry 15lbs or toppling apples around. Parents carry and drop enough stuff as it is. 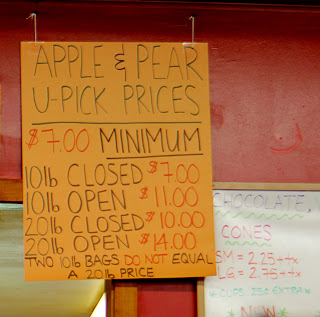 So between Noggins and Elderkins, my final verdict is this: If you have very young kids that might not be ready for an undertaking as large as Noggins, Elderkin's is your better bet. You can come and go on your own time, you won't have to fork over $9.20 for your kid to eat sand and get trampled, and you can get yourself some ice cream. You deserve it.

If you have adventurous kids who are ready for the fun zone at Noggins, you will have a blast there.  If it's drizzling or damp, even better. Bring a towel, jump in puddles, and have more of the place to yourself. And hey, there's no reason why you can't do both farms. Why not spend the afternoon having lunch and picking herbs and pumpkins at Noggins, then head down the road to Elderkin's for apple picking and a delicious home-baked supper?  That's my definition of a perfect day.