My last two posts discussed public farms in Windsor and in the Greenwich/ Wolfville Area.

Continuing on our farm-crawl tour of the Harvest Highway, Blue and I explore Agri-Tourism in Port Williams, Nova Scotia. From the 101, you will take Exit 11. Travel along the Greenwich Connector to Starr's Point Road, turn right and follow the signs. 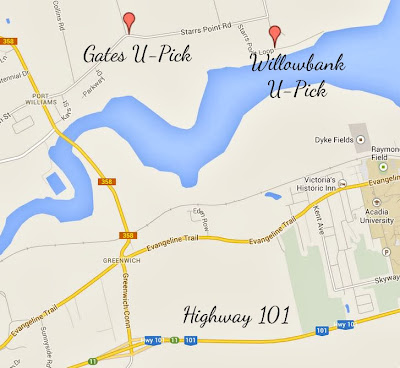 Gates U-Pick
Of you come at the right time of year, you  will see right away one thing that makes Gates U-pick unique: the sunflowers. Even if you opt for one of the other farms, it is worth a visit to Gates just for the opportunity to photograph your family amidst a sea of yellow. 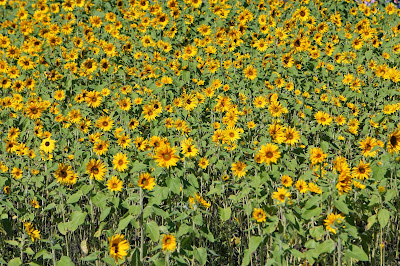 The sunflowers visible from the road are gorgeous, but these are just the small ones. At the end of the orchard is a second field with even bigger sunflowers!  And these are not just eye-candy, it's a sunflower U-pick. Imagine that! Your wee one gets to yank giant flowers from a garden to her little heart's content, all for only a quarter apiece. The attendant offered a great tip which was to pull them out by the root and place them in a bag. Even though I didn't arrive home for another 5 hours and the sunflowers were in the car, ours still survived the trip.

One word of caution: Big yellow flowers generally have bees. While they won't likely bother you with all those big yellow flowers to keep them busy, those with known allergies to bees may want to avoid the sunflowers or bring an auto-injector. If you aren't allergic to bees, I suggest you gather your wits just long enough to stop and have a look at the bees with your child, and talk about how they collect nectar and perform other bee business. It's all part of the learning experience.

Unlike most farms, the hay wagon ride at Gates is optional. It is meant as a tour rather than just a means of transportation. The wagon travels in a loop and deposits visitors back at the parking lot. Once back there, you can get a receptacle for picking apples and then roam the orchards at your own pace.

While Gates offers a modest 20 varieties of apples instead of the 40 or more that some other farms have, the price is a little lower than the competition. It is only $6 for the first 10 lb bag and $5 for subsequent bags. Pears are $5 a bag which is a steal. At the time of our visit, Gates was the only farm that was still offering U-Pick pears. I'm not sure if that was because they have four varieties or because Gates doesn't have the throngs of people coming in and picking the trees clean.
On top of the great prices, the Gates farmers understand that your children want instant gratification when it comes to delicious fruit, so they boast an all-you-can-eat policy. I'd hazard to say that most folks are going to help themselves no matter what the orchard policy is, but for the sticklers, Gates will give you their blessing. Healthy free munchies... no guilt required. Parents have enough guilt about everything else in parenting, we don't need to add the shame of cowering behind a hay bale with half eaten cores until the farmer goes by.


This U-pick is sweet and simple and I don't feel like it requires any further embellishment. It's an excellent spot for a picnic or a family outing. And most of all, it's the place to be if your aim is to teach your youngsters something about agriculture. Gates' claim to fame is that they specialize in educational tours, so these are the guys who will gladly answer any questions your children may have come up with in relation to farming. I would go as far as to say that Gates would be one of my top choices for a school or day care field trip. You could even bring some harvest themed books along with you and read them here, under the shade of the trees.

For added fun, if you have kids under 5 they might love this snazzy song by Nancy Stewart: ***Warning: the music will play when you click on the link. Turn your volume down if loud.***  You can download the FREE mp3 to play in the car or, if you're like me and Blue, you can break out into spontaneous song and dance in the middle of the orchard.

If you're not tapped out from all that dancing, continue down Starr's Point Road to the loop at the very end and turn right. Follow the signs to Willowbank U-Pick.

We loved Willowbank. This orchard has a drivable loop so you can circle the orchard and park close to where you are picking. If you have been following my blog, you know how much I hate carrying stuff, especially when I usually also end up carrying my slow moving tot.  This is excellent.

And what's more is the price structure. In addition to the slightly above average $8 bag, Willowbank offers a deal of $4 for a 10 lb+ bag of ground apples. It is a dollar less for subsequent bags of either. Since Blue can't reach most of the branches, the majority of her apples end up being from the ground anyway. She doesn't mind collecting them this way. I showed her how to inspect them and she hunts for good ones like she's collecting Easter eggs. Since our bag wasn't completely full, the farmer eyeballed it and charged us a dollar for about 40 apples. It has been a week now, and the remaining apples are still as fresh and unscathed as the tree apples.

Willowbank also offers a moderate number of attractions including a hay tunnel, petting zoo, antique museum, hay wagon rides, pumpkin picking, corn maze, picnic and recreation areas, and walking areas with river views. Weekend visitors can get a bracelet for $5 and kids 2 and under are free. I couldn't persuade Blue to try the hay tunnel because it had scary Halloween decorations, but I asked some other parents who raved about how much fun their little ones had in it.

The petting zoo was a tad underpopulated in relation to the number of people who happened to be in it with us. There were two skittish sheep, two over zealous goats, and one alpaca.  You should Google alpacas before you go because inevitably, someone is bound to ask what the difference is between a llama and an alpaca. If you've spent even 30 seconds on its wikipedia entry you can come out looking like an expert in zoology. Your kids will think you are a genius.  Then you will step in poop. 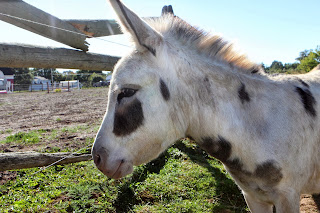 In addition to the petting zoo animals that don't like being petted (but are fun all the same), there is a white donkey behind an electric wire. This is the only donkey I have ever seen who doesn't look like he's suffering from depression. He had a comical hee-haw that all the kids found entertaining. There was also a pen of turkeys and an enclosure with really cool bunnies. I  believe one was a black Flemish Giant, or just a really big honkin' rabbit. Another one, I think was a spotted Rex, or a freckle bunny, as Blue dubbed it.

I don't have much else to say about Willowbank but it was my favourite by the end of the day. This will be my first choice next autumn. While I do love a simple apples-only farm for a distraction free learning experience, if I'm going to drive more than an hour I do like to have a little extra something for my daughter when the apple picking is done, and I like that something to be in moderation. Willowbank has just the right number of people, it doesn't have overinflated prices or a herd of over-aggressive goats who eat your hair and pee in your purse. It just has a few nice things, which take up exactly the amount of time and cash that I want to spend in a farm.

Bee and pear photos provided by Freedigitalphotos.net. courtesy of Toa55 and marin, respectively.
Posted by Mom T at 10:13 AM