How I Learned to Stop Worrying and Love the Tantrum - Dr. Toughlove

I work with toddlers so I've seen all kinds of temper tantrums, or "meltdowns" as parents so affectionately call them.  There is an infinite number of reasons why a child might be flying into a rage: They were denied a cookie, they saw a bug, somebody touched their arm with their finger, their sock felt wrong, etc.  I'm sure you can think of fifty off the top of your head, and if you have a two-year-old, they might be just from today. And there are a lot of resources which will tell you how to handle each case.

But while reading about human development and child psychology,  I have learned some things that suggest there are not really a million kinds of tantrums. They follow a pattern. I'm going to break them down into three categories here: Fatigue, Fear and Frustration, and Extinction Burst. There is some overlap between them but in my experience, understanding which one my child is experiencing can either help me remain calm throughout it, or at the very least make it more interesting to witness. 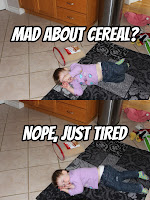 All parents are familiar with fatigue, so I won't go into detail about that, other than to say when a child is tired, the thing their temper is flaring over isn't really the thing. When kids fly into a rage because they were not permitted to eat glue or lick light bulbs, most parents know that it's time for a nap, not time for a detailed rational summary of all the potential hazards of glue and light bulbs. Knowing that the content of the tantrum isn't the same as the reason for it can help you save your breath if you can identify a fatigue tantrum. And if you still want to talk about the dangers of light bulbs, just make a note and bring it up later when your child is well rested and attentive.

The second category refers to situations where children are at a loss for how to handle a social situation which they are not in command of (frustration), or they are experiencing emotions that are too big for their level of control (fear, or in some cases, anger). For example: another child takes their toy so they become aggressive. Or you take them to visit a relative they've never met and they are so afraid you have to pry their hands off the door jamb with a crowbar.  So what's going on here?  I like to call this an "emotional puzzle" and here's why.

When Early Childhood Educators want to make sure that their curriculum is balanced, they look each of the categories of development with the acronym SPLICE: Social/ Physical/ Linguistic/ Intellectual/ Cognitive/ Emotional.  Each category has modes of facilitating learning. For physical learning adults provide children with sports equipment, or fine motor activities like markers.  For cognitive learning, adults provide children with things like puzzles. For linguistic and intellectual learning, we give children books and we talk to them, among other things.  What happens in each category is that children encounter obstacles.  They miss the ball, they colour outside the lines, they put a puzzle piece in upside down, they try to speak but they say things like "I swimmed" or "pasgetti." Adults generally understand that all these errors are part of the learning process, and in many cases we find their little mistakes adorable.

So what happens in the social and emotional categories?  It isn't any different in terms of facilitating learning; adults provide group games (tag, I spy, etc) and toys that require cooperation (teeter-totters, soccer ball) in order to give children an opportunity to develop social and emotional skills. But the obstacles that children encounter in these categories are notably less pleasant in nature than obstacles in the others.  A child screaming "I had it first! It's mine it's mine!" is not as endearing as a child drawing a person with no torso.  And humans have a natural inclination to react emotionally when another human is doing the same, even if it's irrational.  That's why you hear exasperated parents shouting things like "Don't grab!" or "You're being selfish!"  or "Calm down! It's just a bug!"

Psychologists are now telling us that a certain level frustration is healthy for children.  While it's normal to share their feelings, a better way to handle this kind of tantrum is to think of it as a learning opportunity. In the same manner you would say to a child "that puzzle piece is upside down. Try turning it,"  you can offer an emotional child an alternative behaviour to help them handle it next time. Either before the tantrum erupts, or if it's too late for that, after the tantrum has subsided and you have already dealt any necessary consequences, just tell the child, "next time try saying to your friend 'you can have this toy when I'm done'. And if they don't listen you walk away and tell a grown up." (If you have a very young or less verbal child you might have to whittle it down to "tell him 'no, not done'.")

Also keep in mind that there might be some experiences that are out of your child's range of emotional ability. For some kids, sitting on Santa's lap might be like giving them a 1000 piece puzzle.  You might need to accept that they are not ready for some things yet, and throw that activity into the "try again later" pile.  And that's okay. Alternatively, you can reduce the situation to something manageable, and assist your child one step at a time, the same way you would provide a puzzle they can do with assistance.  For example, at a birthday party one day my very shy daughter was getting overwhelmed and a tantrum was looming. So I had to talk her through it.  "We'll do three things.  First we'll put the present on the table, then go sit in the chair and eat some cake, then we'll get a balloon. And if it's still scary we'll go home."

Children do not develop at the same rate in all categories, so don't compare your child to another one.  While another child may appear to be even tempered and empathetic, he might not be able to kick a ball or hold a pencil.  But he will one day.  And a child who is reading by age three might fly into a rage when somebody looks at her funny. But her temper will improve one day.  There is no "right" order when it comes to categories of development.

This is a topic my husband brought up one night as we listened to our two-year-old bawling and screaming from her bedroom because we were weaning her off co-sleeping.  "This is just an extinction burst," he said, all academically.  He reminded me that this was the often forgotten-about part of Operant conditioning.  So what the heck does this mean?

For the uninitiated, I'll give a brief Behaviorism for Dummies:  Psychologists like Pavlov and Skinner dealt with human behaviour as a series of conditioned responses, i.e. we do things because we're rewarded and we don't do things when we're penalized for them.  We eat because it makes us feel good and we wear shoes because rocks hurt. The system of cue–response–reward is what's commonly known as a habit, and it forms the basis for most of the things we do, not including the deliberate and rational actions we take.  Since young children don't usually think rationally, almost everything they do is the result of either a reflex or a habit. So for example if you give your child a cookie every time he cries, you will teach him to cry.  If you refuse to give him a cookie, he will eventually not cry for one anymore. This is mostly common sense. 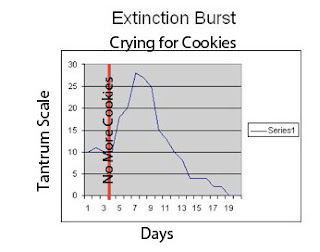 But does it happen instantly?  Of course not! The first time you say, "we're out of cookies..."  Tantrum! The first few times you leave him at daycare? Tantrum!  The first time you tell her "no soother?" Tantrum!  Maybe even the second and third time? Tantrum!  So what's going on? This is what's knows as an extinction burst. Literally, a burst of a behaviour that is about to become extinct because the reward is removed. When a habit is broken, the part of the brain that connects the cue with the response and reward (the basal ganglia, if you care), will fire off one extreme last-ditch effort to keep the old habit going. This is what makes you cheat on your diet, start smoking again, or click your mouse like crazy after your computer has frozen up.  The craving becomes overwhelming because your brain is sending the signal over and over that the cue demands a response now. In the case of my daughter wanting me to sleep in her bed, her little brain is telling her "yell, and she'll come back. If not, yell like a banshee! Ask to go potty! Ask for a hug! Ask for hot chocolate! Panic!"

The good news is that once the reward is removed, and once the extinction burst is over, the tantrums will stop.  Your child's brain will delete the programming that tells them they must follow hunger with sugar or loneliness with "mommy only", or distress with a soother.  They will find something else to replace it, for example healthy food, a caregiver, or a different method of self-soothing.

The controversy between the "crying-it-out" sleep training method and other "gentle" methods may stem from the fact that a child's frantic plea may be an extinction burst or it may actually be a genuine need for human contact. It's different from child to child. If you, as a parent, feel that your child is legitimately terrified of being left alone in a helpless state, crying-it-out may not be for you. You may feel that your child is confused and may be emotionally damaged if left to cry to early. But in other cases, your child may be crying simply because last night they cried and it earned them a snuggle. In this case it is not fear or an emotional need that fuels the outburst, so much as a want and a habit.

In my personal opinion, if your child is so young that you don't know whether they are experiencing an actual need or just an extinction burst, I would err on the side of indulging them.  Experts say you can't spoil a child under 12 months. And once you know your child is ready to break a habit, armed with this information you can help them break it and endure the extinction burst at a time when you're both ready for it. 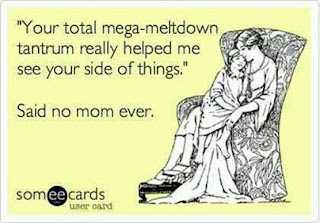 Now it sounds like I'm claiming to be all rational about tantrums all the time. You might picture me watching my child, all dispassionate, while she throws herself on the ground and I take out a notebook or my camera while nodding and saying "hmm... this is all very interesting."  Sometimes I do that, just as sometimes a lot of moms laugh at the absurdity of the tantrum.  But just to be clear, once in a while, in the heat of the moment I can get very exasperated as a parent and sometimes I make mistakes, or raise my voice out of frustration.

But I forgive myself.  And so should you.

The facts about tantrums I have passed onto you are helpful in those times, later on, when you're reflecting on the day and wondering, "Am I being a good parent?"  You'll find that most of the time the answer is yes.  Because there is being informed about psychology and then there's being human. And in the times when you are being very human with your child, that's just another emotional puzzle for your child to master.  How do you help them solve it? You say, "I'm Sorry. Mommy got frustrated. Will you forgive me?"