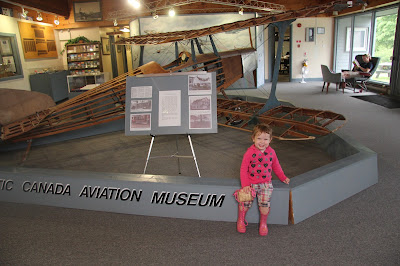 Almost anyone who has come and gone from the city is aware of this museum; you can't miss the signage on your way past the Halifax airport, not to mention the jet parked adjacent to the highway which certainly garners some second glances. Despite this, the Aviation museum doesn't draw the same crowds as the museums within the city limits. Which is a shame  because for a wide range of children who are into machines and transportation, or even levers and buttons, this museum has a lot to offer. But at least this means a less crowded experience for you!

There is no admission fee for this quiet gem, just a suggested $5 per adult donation. You have nothing to lose! If you give it a try and your toddler runs screaming five minutes into the exhibit, you can even be forgiven if you opt to forgo the donation bin until your next successful attempt. One of the advantages about this museum is that it's about 25 minutes from North Dartmouth, just enough time for your little one to catch a power nap on the way, so hopefully that won't happen. 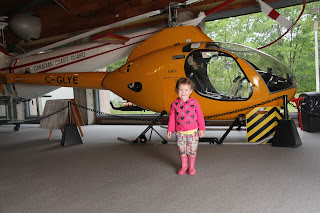 This museum has a long, enclosed ramp to get into the first showroom, which  is great for strollers and fun for toddlers to trot down (and up, and then down again!), and all along it are model planes in display windows. Then turn the corner and BAM! Helicopters and planes galore!  Real ones! Whoa!! If your little one is already pumped up from the little models on the ramp, they will not be expecting this enormity of the real aircraft by contrast. They'll want to climb into one. They can't... they're not allowed. But wait! What's this?  An actual size toy cockpit just for kids!  Even if your little one doesn't necessarily like airplanes, they'll love sitting in the pilot's seat, pulling levers and beeping buttons, and swiveling the yoke around going "rrrrrrr" and blowing raspberries.  Blue, who is two, who doesn't give a rats' caboose about planes normally sat in this thing for the better part of half an hour, chauffeuring me to various circuses and balloon stores around the world.

There's a model of the airport grounds and all its components, which light up when separate buttons are pressed.  Little children won't be tall enough to see the lights come on, but I find that generally kids don't care, just pushing all the buttons is a joy.


Down another ramp is the hangar, where many more planes await your little explorers. You can climb up small steps to view the insides of planes and cockpits, and in one place you are invited to step on a pedal to slowly make a plane engine turn over. The kids will enjoy having something interactive at their level.

If you have one of those tots who spends a long time playing with buckles on car seats and high chairs, they will enjoy walking around and buckling and unbuckling the easy-to-maneuver seat belts on the plane seats scattered about. Please don't rush them away from this activity to look at more planes; the hands-on parts of the exhibit is great for developing fine motor skills, and it will be what they learn from the most! This is a great opportunity to sit beside your child and play pretend. Where will you go on your plane vacation?

At the gift shop you will find T-shirts for babies and young children, as well as the usual tourist fare and some toys. We opted for some cheap foam planes (3 for a dollar), which were great fun until they inevitably crashed and broke to bits, but that's all part of the learning. Now might also be a great time to introduce paper airplanes to your little one, and if you don't know how to make one, now's the time to learn! There are many great websites on the topic, such as this one. Memorizing the steps to making a basic paper airplane is something all parents should master. One day it will pay off when you find yourself with nothing but a piece of paper to save your child from disastrous boredom (in a bank, a line up, something new to toss when their frisbee goes on the roof and they're in tears...)


If your child loves plane or helicopter themed activities and you want to explore aircraft further, you can take them to the airport, the Shearwater Aviation Museum, or even just the library for some airplane themed books. We enjoy the very hilarious "Angela's Airplane", by Robert Munch,a silly story about a five-year-old who accidentally flies an airplane. We also like the more informative, "We're Taking An Airplane Trip" by Dinah L. Moché, which takes a practical approach to the subject of air travel and airplanes, and is a great resource if you have an older child (3 to7) who is taking a plane for the first time. 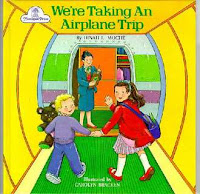 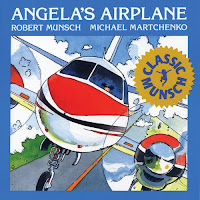