Don't Read This in a Family Restaurant 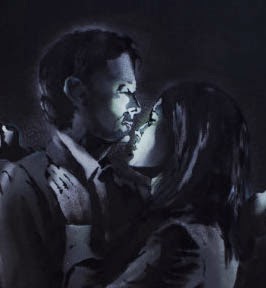 The following is a true cautionary tale of how I found myself in the Twilight Zone. The names have been changed.

It was a Friday night. My two year old and I sat in a busy family restaurant close to the movie theatre. My husband was out of town, and I had decided to take the opportunity for some bonding time with my daughter.  We talked about the day’s events, pointed out interesting things in the restaurant’s eclectic decor and drew pictures of moose with giant antlers on the back of the place mats.  After a few minutes she turned to me and said, “Mommy, why’s it so quiet?”

At first I wanted to say, “Because you’re not squealing for once, dear.”

But as I looked around the restaurant, I saw what she meant. There wasn’t an empty seat in the house, but you could probably hear a mouse fart.  At the table next to us were eight teenage girls. They sat with their heads lowered, silent. They were all reading magazines. Once in a while they would swap or say, “check this out,” but otherwise they weren’t conversing with each other.

“Teenagers.” I thought. It’s typical of youth to get so absorbed in popular media.

On the table to my right there was a family of four. The two boys were playing a card game. The dad was looking at the newspaper, and the mother was scribbling something on a lined piece of paper. “At least the kids are playing together,” I thought. But they weren’t. On closer observation, they were both playing solitaire. Their food was getting cold.

At the next booth, a father sat with his adult son. The son was sorting through a stack of flyers and mail with a look of concentration on his face. The father was staring straight ahead, saying nothing.

The next table was no different, except that it was young children staring into the restaurant’s silent video screen and the parents who were distracted. One of them had an open volume of Encyclopedia Britannica; the other was making a scrapbook about their outing.

All around the room, the patrons sat with their heads lowered, not uttering a sound.

The silence was broken when the restaurant staff burst out of the kitchen and began to sing their own version of “Happy Birthday” to a jubilant looking woman with a flock of white hair who was, according to the cake, turning 65.  The family at her extended table began to sing and applaud. As the server presented the cake, her husband began to root around in his bag. He pulled out a phone book, shook his head. Pulled out a stack of post-it notes, shook his head. Out came an atlas, a GPS device, a deck of cards, a tape player, an old address book, a stack of files, a farmer’s almanac, and a watch. The cake was now on the table, candle burning, dripping wax all over the cake. Frantically the man sorted through the junk. Everyone waited. “Hang on!” he said. “Ah, here we go.”  He produced a Polaroid camera, and took a photo of his wife’s special moment. Then he took another. And another. He took 12 photos, and handed one to everyone at the table. At last the lady blew out her candles which were now melted into stumps. Everyone cheered. The family ate cake slowly and silently while staring at the photos.

The teenagers at the table next to me had been sufficiently distracted by the Birthday display that they were looking at one another now. “Can you check what movies are playing, Britney?” one of them asked. Britney dug through her giant purse and pulled out a newspaper movie theatre guide. Something else fell out of her bag.

“Oh, my God, check this out, guys. I’m like, so lame.” She plunked a thick photo album on the table. The girls huddled around to look at the photos. I’ll admit I took a peek. Britney wasn’t kidding about being lame. The album contained about 500 photos of Britney and different plates of food she had eaten.  They forgot to check up on the movie.

“What is going on here?”  I thought. “Is this a reunion for the School for the Socially Inept?”

A large truck pulled up outside. A man came in with a box of envelopes. He handed them out to each and every person sitting in the restaurant, except me. People dropped their forks and began to open the envelopes.

What could be so important? My first thought was that these people were all part of some kind of team of shareholders, awaiting news that they were all millionaires. They seemed eager enough.

“That’s adorable!” chortled one woman, ripping into her envelope furiously. “Just look what your aunt Janice sent me.”  It turned out not to be a letter at all, but a piece of paper with a happy face drawn on it. Her children shrugged, disinterested, and ripped into their own envelopes. Some people got newspaper clippings. Some had junk flyers.  Nobody receive anything important at all. And yet they went on reading and stacking and sorting like oppressed mailroom staff.

The story is true. But the names are changed to protect certain telecommunication devices of supposed intelligence.  I suppose by now you know what I’m talking about.

Now before you dismiss me as a condescending technophobe, let me say this. The reason I don’t own a mobile phone is not because I’m such a superior human that I can resist the allure of social media. I have a computer at home that I waste plenty of hours on every night. I have a camera that I find hard to put down. The reason I don’t have a phone is because I can’t resist it. I know that if I had one, I would be right there with everyone else reading and texting and ignoring my family.

Mobile technology has robbed us of our engagement to the world with brilliant stealth. Nobody looks up long enough to notice that nobody is looking up anymore.  What happened to the time when Family restaurants were family time? Or when dance classes meant spending that 30 minutes watching your daughter twirl and tiptoe?  Or when family game night involved a board and dice and actual eye contact?

I’m proud to say that I have remained mobile device sober. But I’ll admit I’m not yet facebook sober– I’m on there as soon as my daughter goes to bed.  I liken it to being a weekend binge drinker instead of walking around with a flask of malt liquor in my pocket. I'm working on it. But to get to a point of moderation is not so easy in a society that deems this behaviour so acceptable. We now know that texting and driving is dangerous. But so is texting and living.

As a simple rule for us and one to teach our children, I propose this:

It’s unacceptable to use a device in a situation where its low technology predecessor would be inappropriate. If it’s antisocial to read a book on an outing with your friends, don’t read internet articles. If it is rude to sort through paper mail while entertaining a guest, don’t check your email. If taking an entire roll of film of something would be incredibly superfluous, don’t take 36 digital photos.

While the size and novelty of a device makes access to the world possible, it doesn’t make it permissible. If you must carry something with you at all times, carry cognizance. Real life... there's no app for that.